I have to say that my previous article about the Gay Marriage ruling has to be one of the most popular I’ve written, at least in terms of likes. Which surprised me, but then the things I think people will like seem to be ignored and the ones i think they won’t care about tend to get the most attention. Go figure.

I’ve had a bit of time to calm down from my initial reaction to hearing about the Ruling (which, you know, hooray for marriage equality). I’ve had a number of discussions with people, most of whom understand my feelings but figure that what I’ve predicted won’t happen. Ranging from Lady Imbrium thinking pedophilia won’t get the same status of acceptance that homosexuality has, to some co-workers thinking they won’t end up criminalizing religions that don’t agree…to at least one person saying that it would be good if religious organizations and their members did face prison and so forth for not supporting gay marriage regardless of the reason and that I was lying about my support for marriage equality and also a bigot.

I even had my sister unfriend me on facebook because some of the stuff I said was “upsetting.” But then she’s an atheist (who doesn’t like religion) who held up that the 12  of most happiest countries in the world had legalized gay marriage, and I was the deeply religious person who pointed out that correlation was not causation, those countries were probably partially happier because they had working universal healthcare systems (more than the fact that maybe 2% of their populations had the right to marry someone of the same sex) and that Sweden (which is higher than the USA) is also the Rape Capital of the World.

I didn’t mention that the United Arab Emirates (which is homophobic to the extreme) was also on that happiest nations list. And I’m pretty sure that ISIS would poll as a pretty happy place too…depending on who you ask. So it is possible to be a happy nation without being a gay nation, if you will.*

But all these discussions got me thinking. I wasn’t just unhappy because the wording of the Ruling pretty much does criminalize any religious organization or person who speaks out against gay marriage the same way it did to any white person discriminating against a POC with the equal rights amendment. I am sure that no doubt it is going to become much harder as a religious person, regardless of your religion, but the KKK still gets to exist so maybe, just maybe, religious organizations that aren’t 100% gung ho for gays can still remain.

Gods, look at what I’ve been reduced to. Looking to Racists to provide me hope. Fuck. 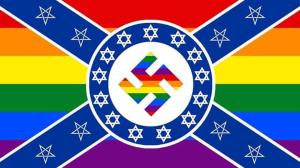 Yeah, on a side note, that whole Confederate flag thing has just pissed me off. And I’m not even a Southerner, I’m something of a Roman Germanic at this point. But I hate when people ignore history for the sake of their agendas. Hel, I even made a video about it.

And yes, I know I sound like crap. I’m still figuring out how to make these things and my ever present allergies love to fuck with me. But there’s that rant, in video form. So back to the topic at hand: #SCOTUSMarriage.

As I get further into the Cultus Deorum, I discover things. One of these things I’ve discovered is an abiding desire to have things done by tradition. Now, this is similar to the desire of Reconstruction, but there are some key differences. For example, this Traditionalism doesn’t just exist in the realm of my religious desires. It also exists to the practice of the State. Romans were, by and large, very traditional. That’s how they held their Republic for as long as they did and why Caesar was killed primarily. He broke tradition and returned the abolished monarchy.

So when it comes to my government, I want my government to keep to its “Traditional” ways. I.e. the way it was founded to run. With the primary voice being the people, which is spoken by the Congresses of their states and federal governments, the executive to enforce the will of the people, and the judiciary to make sure that all is legal within the framing traditions of our government.

Up until now, the Gay Marriage debate had been following these traditional avenues. The people came together and voted on if their state recognized gay marriages or not. Some states said yes, some states said no, but the will of the people was recognized. America is a wonderful place with full mobility of its citizens, so to me the worst case situation of if a state banned gay marriage was that those gay people wishing to be married could always move to a different state. Not always what you want, but then life is about compromising and doing the best you can. After all, thousands of people are moving to Colorado simply so they can have legal weed. So it’s not like this kind of thing doesn’t happen.

Now, how this came before the SCOTUS was basically an issue of “does a state that bans gay marriages have to recognize a gay marriage performed in a state that does.” And this is an important question that really did belong in the Supreme Court. Simply because a state has banned something, doesn’t mean that they don’t allow that thing in if it is legal in the originating state. Most states accept hetrosexual marriages from other states, even though it legally didn’t happen in their state, mostly because it saves a lot of paperwork and prevents other states from vindictively not recognizing their marriages. Now, weed from Colorado is still going to be illegal in say Tennessee, so there is the flip side of some states not recognizing things that are legal in others. For example, I can legally walk down the streets in Knoxville, TN with a broadsword now, but if I tried that in New York City I’d probably be arrested. So it was far that there be a judgement about which way those legalized gay marriages were going to go.

But a couple important things to remember.

1) The debate was still happening. Some states legalized it, some states didn’t, and some states still haven’t even really started the discussion in legal terms.

2) The issue before the court was solely if states that banned it should recognize marriages from states that legalized it.

So when SCOTUS came out and said that gay marriage was a Constitutional right, apparently using a phrase that does not even appear in the Constitution, they overstepped their sworn oaths of office and the bounds of power for their branch of government. So they silenced the democratic process, and states having the discussion can no longer decide for themselves what their people want. They violated the foundation of the democratic process.

Now, the SCOTUS can say that a law is unconstitutional and overturn it, so by overturning the bans on gay marriage they have not inherently violated the Law. But they used a case which had nothing to do, legally, with overturning those bans within those states themselves and used it as a springboard to jump from what states could and could not decide for themselves, to rewriting the Constitution. Now, legally the Constitution can be amended, but has to be done by the Congress and Signed by the President, it cannot (or at least, should not) be done by the Court. Because the Courts are unelected bodies. They are that way to protect the people from the whims of demagoguery, but limits were placed on their power to legislate to prevent tyranny.

And what the SCOTUS did was an act of Tyranny.

Which is wrong. It goes against the fundamental natures of what the USA is supposed to be, a democratic republic. It is the people who are to decide what is right and wrong in the land, not for those in power above them. SCOTUS violated this. And that’s part of what has had be so angry. They have violated Iustitia, and set their desires of what they think is right, above the desires of those they should be serving.

Now, a lot of people are taking the attitude that Gay Marriage/Marriage Equality is a good thing. In this I agree. Indeed, there was never anything in the Constitution that said Gays could not be married. That’s why there’s been pushes to get an amendment made to ban it. Because even the Conservatives admit…it’s probably legal. And that’s why the democratic discussion was needed, so that everyone could see, legally, that Equality of Marriage was the same as every other Equality guarantied by the Constitution. But we let people voice their oppinions and we make sure that dissenting views are protected, and those people who do not agree can at least say “Well, we tried, and we lost, but that’s how it work so it’s okay.”

So when SCOTUS went and by all accounts legally changed the Constitution and gave us Marriage Equality, can’t you just be happy with that?

But it’s not enough to obtain a Good Thing.

Good Things Must Be Obtained the Right Way.

Let’s say you want a new, Big Screen TV. But it’s expensive and it will take a lot of work to get the money for it. Or you could go in and steal it. Which way is better?

Well, most people would say that even if it is harder, you should work hard and save up and buy it. Or work hard and convince someone to give you a Credit Card so you can buy it and then pay them back. But most everyone would agree that busting into the store, grabbing the TV, and running, is a bad thing.

But what if you have a cop go into the store, confiscate the TV and then give it to you?

Technically you haven’t stolen it. Technically, the cop does have the right to confiscate material goods (in some cases). But I don’t think there’s really anyone out there who would feel that something righteous, just, or legal had just occurred. In fact, because this used to happen, there were Laws passed about how the Cops could confiscate materials and dispose of those materials.  Because you still took something from someone else, and you denied them the right to try and stop you or giving them just compensation. You denied them the right to protect what was theirs. You just used legal authority to take what you felt entitled to have, even though you had not worked for it.

And that’s really what SCOTUS did. SCOTUS played the cop who confiscated something and gave it to someone else because that person felt like they deserved it. Sure, the cop feels okay because he helped a friend out…but it was still an illegal action. In this case, the proverbial TV is Marriage, and the compensation would have been “You can still keep believing as you please without repercussions.”

But now, SCOTUS has violated the Law, it has violated Tradition, and it has violated the democratic process. On top of which, by the way they wrote their judgment, according to 4 of the SCOTUS justices they have potentially criminalized any anti-gay language and risked criminalizing the vast majority of the nation’s citizens and the religions that live here. And that’s, I think, what has made me angry.

*please don’t kill me over that pun.

2 thoughts on “Some Further Thoughts on My Issues with #SCOTUSMarriage”