Today is another one of those Heathen Holidays I like to post about. However, this day is not like the others, given to martyrs and remembering the vile deeds done to the followers of our Heathen ways. No, this day is different.

This day honors when it was Us who did the doing. Namely, the Sacking of Paris by Ragnar Lodbrok, after he lay siege to it 120 longships filled with mighty Vikings! It was only through the giving of Danegeld by Charles the Bald that Ragnar was convinced not to burn the city, but leave it be.

Because any good Viking knows, why kill the cow for beef when you can get milk for years!

For this deed alone, it would be enough to remember mighty Ragnar. But there is more to this mighty man. Held to be a King of Denmark and Sweden, he is likely one of the most well known of the Vikings, and certainly one of the most successful, who battled all over the place. Indeed, he is likely to be even more manly than Thorkell the Tall. 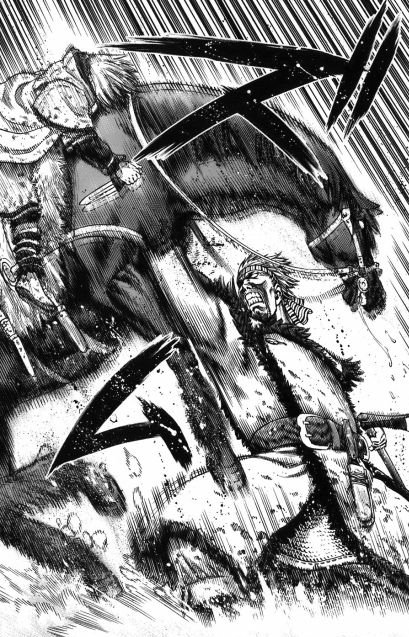 That's Thorkell the tall, and yes, he did lift the horse from the ground with one punch.

To give a short list culled from the Wiki, Ragnar was connected to: Lathgertha (wife), Aslaug (also wife),  Hvitserk (Whiteshirt) (son), Björn Ironside (son), Sigurd Snake-in-the-eye (son), Ivar Ragnarsson aka Ivar the Boneless (son), Ubbe, Ubba or Hubba Ragnarsson (son), and Halfdan (son). The last three sons were leaders of the Great Heathen Army that rose up in revenge for Ragnar’s death at the hands of Aella of Northumbria, a King in England. He is also connected to the Volsungs of the Volsung Saga via his wive Aslaug.

From the Wiki as well, there is a copy of his death song, said as he was thrown into a pit of vipers to be slain.

It gladdens me to know that Baldr’s father [Odin] makes ready the benches for a banquet. Soon we shall be drinking ale from the curved horns. The champion who comes into Odin’s dwelling [Valhalla] does not lament his death. I shall not enter his hall with words of fear upon my lips. The Æsir will welcome me. Death comes without lamenting… Eager am I to depart. The Dísir summon me home, those whom Odin sends for me [Valkyries] from the halls of the Lord of Hosts. Gladly shall I drink ale in the high-seat with the Æsir. The days of my life are ended. I laugh as I die.

So let us remember Ragnar Lodbrok, not as a martyr, but as a hero and an example of what we can become if we will it! Live life and seek deeds as if you would be his equal, so that you may stand in the halls of Odin, Freyja, and Hel without shame! Hail, Ragnar!