So we’re on the second week of H. There were a number of things I could write about, Hel, Heathenism, etc. But this time I decided I’d actually get a bit personal, and talk about something I did this last weekend, and how it relates to one of the most important aspects of Heathenism: Heritage.

Ancestry is one of the Nine Noble Virtues. Heritage is something that binds Heathens together. We are where we come from. Our ancestors are what make us who we are. The heritage, genetic and cultural that they give us, is what defines us as we grow and pass it on to the next generation.

I went on a pilgrimage of heritage. It had been close to ten years since I had visited my grandparents and the rest of my dad’s family in FL, thanks largely due to my parents’ divorce. My grandfather had died, as had several others, and I missed the funerals. My grandmother’s health had been failing her, and I wanted to see her one last time, as well as offer mead at my grandfather’s grave. So, after much planning, several delays that pushed the trip back months, and a bit of crazy scrambling, we managed to finally go.

It was also my first road trip in almost ten years. It was my first time driving on a road trip too, and that was an experience for someone who rarely drives for more than twenty minutes at a time. But I managed, and it went well.

Our fist stop was to see a cousin, near Cape Canaveral, where they launched the shuttles. Her name was Sharron, and she was a very nice woman. It was more a spur of the moment thing, rather than planned. Her balcony had a great view of the ocean, and we went and walked on the beach, where I softly gave praise to Njordr, God of the sea. I got a little sun burned, but thankfully there was lotion on hand so I managed to heal that up. 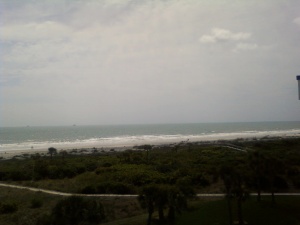 My first glimpse of Njordr's domain

Cousin Sharron and her friend

From there, we drove down to where Grandma and some of the rest of the family lived. It used to be that the family had too main centers, there in Florida, and a larger one in Canada, where they’d ended up settling from Scandinavia. Most have moved away, but there’s a few left, and I got to meet some of them.

We spent the weekend there. I got up early, mostly by necessity as breakfast was early, and we ate breakfast and dinner with Grandma and two of her friends. Sometimes other family joined us. My cousin Dorothy, her daughter, and her husband came one night. It was fun to meet them. Apparently my second cousin, Meg, the daughter, also has a talent for divination, though she doesn’t pursue it like I do. At least not yet. So I think my talents may run in the family.

Me and Dad saw the Hunger Games while we were down there too. He wanted to see it more than Wrath of the Titans, and the second part of Atlas Shrugged wasn’t playing there (we’d seen the first one last year, and are likely to try and see part two this year). It was good, I could see why it’s been really popular. The make up on the Capital people was crazy, but then I think they were trying to show how it came across to a country girl who likely hadn’t seen much make up in her life, more than it was that was how they really looked. I could be wrong though. Still very entertaining, and made me want to start shooting a bow again.

My Uncle joined us for some of the meals. He’s much different than my dad, and looks more like my Grandfather, where as my Dad looks more like Grandma. I am told that I look more like Grandpa’s dad, but I haven’t seen any pics yet to be sure. But my grandma did give me a pic of her and Grandpa, from over a decade ago.

It’s just a wallet sized pic, but I’m going to frame it and put it on my altar. Grandpa, it turns out, doesn’t have a grave. He was cremated, and his ashes cast into the sea, so that the currents could return him to Norway, where he was born. So on Monday, we went to the beach. There wasn’t any swimming, as Manowar were in the water. We found a couple washed up on the beach. I almost stepped on one, but thankfully was alerted to it in time. So instead we walked along the shore, I went into the water a bit, and collected a bunch of shells. I may try to make a rune set out of them.

So instead I took the flask of mead I had brought with me and went into the water. I blessed it, in the names of Asgard, Midgard, Vanaheim, and Helheim, making the sign of the Hammer. I poured out some to Njordr, some to the ancestors, and some for my grandpa. I apologized for not being there, for not knowing him better, and I bid him goodbye, as he was a Lutheran and likely to be in heaven, where as when I go I shall be in one of the Three Halls, and thus unlikely to see him in the afterlife.

Later that day, me and dad went to the grave of Grandma’s parents. There, both of us poured out the last of the mead upon their grave marker. My dad isn’t a Heathen, and is likely never to be one, but I think he appreciated the rite. We stood there, and as we looked down on the metal marker, watching the mead evaporate, he told me stories of them. Some I’d heard about, some I hadn’t.

In the end, I got to do more family related stuff than I’d intended. Which was nice. It made the trip even more special.

During all this, I carried my travel altar, setting it up where we were staying and casting the Hammer Rite and a warding spell. I didn’t take down the spell when I left, but hopefully that won’t be a big deal.

Through it all, I felt the protection of the Gods, namely Skadi, I think. I’m guessing that, going by the fact that it was a lot cooler than I had expected it to be, and there was almost always a cool breeze blowing about where I was. No idea if that’s normal for Florida or not, but for the most part we escaped the heat. Thor and his storms seemed to be elsewhere, mostly the Midwest, so I figured he was off protecting people there and felt I was in good hands. I suspect Freyja was not far, but I wasn’t sure about Hel, and I’m pretty sure she wasn’t in the graveyard where my great-grandparents were. It was a Christian place, and I doubted there were any in her keeping there. Which made me sad, to be honest.

Family is where we come from. I, in a lot of ways, lost my family. I don’t know if I will ever get it back, but if nothing else going down there and seeing both those living and passed, was good. Bittersweet, full of joy and sorrow, but good. Sometimes I feel like I am the last of one line, but perhaps the beginning of a new one. But as I heard the stories of my ancestors, I was struck by the words of the Havamal. And never have they seemed more true.