Paul Walker of Fast and Furious fame died the other day in a car accident. As I’ve heard it from the internet, that’s pretty much the way he would have wanted to go. He leaves behind a daughter, 15, who movie to live with him in the last year after spending most of her life in Hawaii, according to sources that know more about this than I do.

R.I.P. Burn the roads of heaven, hell, and the Nine Realms.

Here, I honor his memory, for his movies were fun, and I hope that he lived his life well.

There was another man, who was driving the car at the time of the accident. Facebook, and I suppose other places, is lighting up with his image too as people who are…upset…at the attention that Walker is receiving with his death post this image: 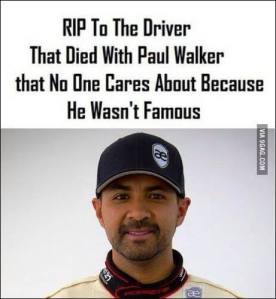 Now, many people think this is a good thing. To also remember the man who died at the same time and place. And it is. We should always honor the dead. But the above image, it does not honor this man. Can you tell me this man’s name, from this image? If I wanted to pray for the safe passage of his soul to the afterlife, or leave grave goods in his name, who would I give them too. “The Driver?” No, that’s not a name. “That dude no one cares about because he wasn’t famous?” No…don’t think that will work either. Oh, it works to send a message, sneering at the celebrity culture that we have, lashing out at the attention being given to Paul Walker. Some may post because they wish to honor those dead who do not get the attention, but far more I think post the above image not because they care, but because they wish to feel superior in “bucking” the celebrity cult.

What they are really doing, is in fact, a form of necromancy. Native Americans believed, and rightly so, that a photograph “captures the soul” of the person in the picture. Certainly a photograph captures one’s identity. And the above photo has been dragged up, drawing this man’s identity, his soul, into the lime light and parading it around as “the body no one cares about” to dance upon the stage of humanity to send it’s message. The bring him back from death, from peaceful rest, to mock and deride, not him, but the attention and grief given to Paul Walker’s death. Both deaths are a tragic loss, but to wave this man in front of those giving Walker attention in an attempt to guilt them for caring over the loss of one more than another, for being sad that a man that meant something to them is gone while having no connection to the other from which to base their grief, as if to say that they are bad people for not giving this other man the same amount of attention? That is not honoring the dead. That is using them as puppets!

And they don’t even have the decency to put this man’s name on there. A name my source found in half a minute.

That is the foulest form of necromancy.

As the Helsen, this is personal to me. I take it as my duty to defend the living and the dead, often from each other. To honor those that have passed, and see them their just rest and rewards. To honor them. To honor the Dead, you must acknowledge who they were and are. You must Name them.

His name was Roger Rodas and I honor his death with the same respect I give to Paul Walker.