Part of the reaction…actually, continuing action because of SB 1062 or as some like to call it “THE Anti-Gay Bill” the usual flaming rhetoric of anti-religious sentiment is blasting through the web. Or so it seems, at least. All religions are evil, supremacist things that want to crush gay people and society and…and…and… 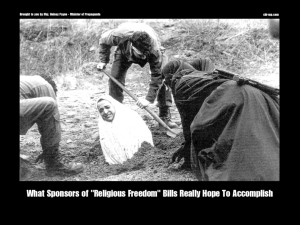 Said every religion everywhere and every when…apparently

Yep, that’s all religion is. A bunch of angry people unhappy with the world who insists that everyone believes the same thing they do and doesn’t want anyone to have any rights, and it is the sovereign duty of humanity to suppress and prevent this by happening by preventing the practices of all religions…by suppressing the rights of those people who are religious.

And sure, there are religions like that. Precisely 2 religions like that, Christianity and Islam (the picture above comes from an Islamic region). So clearly, on the basis of two religions we can make a value judgment that all religions are evil and want so suppress humanity, right?

Do you know how many religions there are on this planet at the moment? According to a quick web search….Twenty One Major religions. 21.

And some of those are actually groupings of religions into a single category. Neopaganism, for example is listed as one religion, when in fact its closer to at least 50 different “neo” Pagan religions. So right there we jump from 21 to 70, and it’s believed that the publicly reported numbers of Pagans is actually small, which means that instead of 1 million it could be closer to 3+ million. But that is a discussion for another time. And this list doesn’t count other “minor” religions which could well be in the hundreds alone. So we could be looking at a world wide number of religions somewhere around 150-300ish. Who knows.

So…2/21 on the small end, and 2/200 on the big end. If I am in a group of 21 people, and 2 of them are complete assholes, according to the logic of people who view religion as the ultimate evil, I should be able to tell without a doubt that every single one of those 21 peoples is an asshole. No discussion.

But let’s look this, shall we? Christianity has 2.1 billion followers and Islam has 1.3 billion followers. So they’ve got less than half the planet’s current population between them at 3.4 billion people, if just barely. Sounds like an over whelming number, right?

points if you get the reference

But because I like thought experiments and playing with numbers. If my “Christian” friends are anything to go by 1/2 to 2/3s of them are pretty much “name only.” One could, if one buys the propaganda, belief that most Muslims probably run a similar stance in 1/3 to 1/2 numbers. Which means that at best you’re looking at a serious number of believers maybe averaging somewhere around 1.7 billion.

Of those 1.7 Billion people probably half of them, on average, believe that Christianity and Islam are religions of peace and acceptance. So now we’re down to 850,000,000 supremacists who want to crush everyone that doesn’t believe like they do.

I could go one whittling down the numbers, but let’s leave it at 850 million people like that, in Christianity and Islam out of a world population of 7 billion.

But some might protest that I’m focusing on just Islam and Christianity. Well, there’s a reason for that. They are the only two religions who have historically shown any tendency for violence against the non-believers. Even religions with Gods dedicated to war such as the Norse/Germanic, Celtic, Roman, and Greek, religious supremacy was never a goal. The religions took part in war the same way the state did, but there was never any push that only their religion be practiced. Only Islam and Christianity has. Indeed, some religions like Shinto and Buddhism are antithetical to the use of violence to force to convert people. This runs across the board for 24/27 of the world’s major religions through out history, and in the modern era 25/27 of them. Judaism was as genocidal and supremacist as Christianity and Islam back when if first started, but hasn’t been for nearly 2000 years.

But numbers are big and complicated, so let’s break it down another way.

You’re saying that these guys want to destroy all native cultures.

That this man and his religion believe its okay to strip away peoples rights and cultures. To kill gay people and beat women. 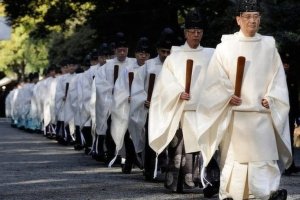 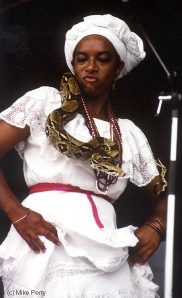 That this priestess believes women are second class citizens and those who worship different than her should be killed.

When you say all religions hate minorities, gays, freedom, etc…you miss the abiding foundations of the worlds’ religions. For the sake of two, you defame and damage dozens of innocent religions, most of which often end up fighting for minority rights because they are minorities themselves. Who fight for equality not because they are supremacists…but because they believe in equality. Billions of innocent people who do nothing but try to respect each other Because of their religions. Think about that next time you feel like saying all religions are evil, supremacists things who deserve to be pushed back and have their rights removed for the same of humanity. You’re talking about most of humanity there.