Last time, on Son of Hel.

“THE GODS CANNOT BE INDIVIDUAL BEINGS!” 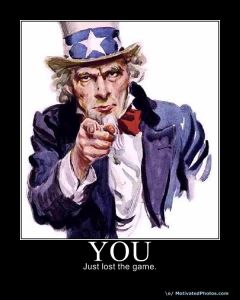 We ended with Halstead admitting there were some merits to an “individualist” approach to the Gods. But of course, Halstead cannot be wrong. So let us being more mental gymnastics.

In this way, you have to get to know someone in order to experience their difference, otherwise they remain an object for you, a mere projection.

But we shouldn’t stop there.  As we continue to get to know a person better, we can begin to feel the ways in which we are connected, in spite of their “otherness”.  On one level the other person always remains an “other”, but on a deeper level, we recognize how we are the same, how we are connected.  I think in order to truly re-enchant the world, we can’t remain stuck at the point where all we see is the “otherness” of the world and its inhabitants; we need to discover that deeper sense of interconnectedness.

At this point, I really think Halstead is on some serious projection run. Speaking for myself as a polytheists, there isn’t all this “Other” business he keeps ranting about. It’s honestly like watching some of those old Star Trek TNG episodes, where you’d have some collective hive mind species learning about humans and other species having individual identities and wondering “how the fuck do you work that way?”

And maybe that’s it. Maybe Halstead has the mentality of a hive creature and cannot understand how beings can exist as individuals. I didn’t think such a thing could exist, but then I’m married to the Goddess of Death, a being who generally avoids dealing with people, so I suppose I shouldn’t question the impossible.

That being said though, this Otherness talk is sounding kinda…I hate to use the word racists, but yeah. “They’re not me, they’re not like me!” and it’s only after getting to know them and discover the ways in which they are “like” you that they become more valuable? That’s…kinda dark. Even for me, that’s kinda dark. “It’s only when we’re connected that we become “Good…” 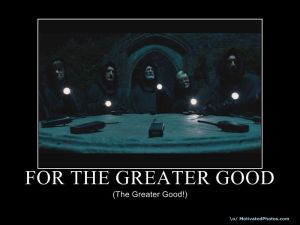 Let’s take Jes’ example of the river which is the home of the river spirit.  Jes says that, because the river has needs and wants that are distinct from our own, we are forced to consider its well-being.  But there are limitations to this way of thinking.  What happens if the spirit leaves the river (which happens in some belief systems that include spirits)?  Is the river then no longer worthy of care?  And even if the spirit is always present, who determines whose needs take precedence when (inevitably) there is a conflict between the needs of the river spirit and the needs of human beings?

Wow, I didn’t know that you had to be forced to care about a being not of your collective Halstead. I see we’re keeping it Dark here.

Also, Halstead, it wouldn’t matter if the spirit left the river for a time. Do you just go burn down your neighbor’s house because he’s not in it? The hell kind of logic is that. I mean, you are the guy who presented us with the “because monkeys shit, gorillas can’t” argument, but seriously. “Well, spirit’s no longer in the river, why on earth should I not dump thousands of chemicals in it?”

Geez, maybe because the spirit is going to come back home at some point? I’m sorry, but are all river spirits supposed to be agoraphobic shut ins for your moral convenience? The river is worthy of care because it is someone’s home, Halstead, not simply when that someone is inside.

And yes, there would be an inevitable conflict between the river spirit and the humans over their needs and desires. Do you know why we have festivals and religious holydays? It’s because those were the agreements that came from those conflicts. Human’s need to divert some of the river for agriculture, so they make offerings at set times and places to the River Spirit to repay it for the wealth it gives us. You know, SPIRITUAL CAPITALISM.

Oh, but that’s right, you’re also an anti-capitalist who doesn’t believe in trade. (Yeah, I’m probably going to write about that one too. Let me know if you guys are tired of this guy and I might not).

Human beings have consistently demonstrated a collective unwillingness to place the needs of our other-than-human neighbors before our own.  The only way to truly protect the river is for humans to identify with the river and to see its needs as their own.  Rather than finding the source of the river’s value in it being the home of another individual like me, I value the river because it is me … and I am it — or rather, we are both part of something else that transcends both of us.

Actually, humans have demonstrated a collective unwillingness to place the needs of our human neighbors before our own too. I mean, it might have something to do with limited resources, those human and non-human neighbors own aggressive tendencies (I mean, why wouldn’t a farmer let wolves eat all the sheep he needs to feed and clothe his family, that despicable bastard). And I mean, really, couldn’t the Irish see that the English needed all their resources? I mean, not handing them over without a struggle was just thoughtless of them.

But an interesting thing happens when the River Spirit is a individual being. It has what some people like to call Agency. It can take care of itself. Piss off the River spirit and you can have droughts or floods. And as countless myths can show, humans are perfectly capable of disrespecting Gods and Spirits, and Gods and Spirits are perfectly capable of smiting mortal asses back into line.

So if being kind to the aforementioned river spirit isn’t enough to make me treat it and the river well, then the fact that it will come kill my ass should. Even you should be able to understand that motivation, given your previous words.

I don’t believe we can re-enchant the world by (re-)populating it with individual gods and spirits in nature.  I think the disenchantment of the world was caused, not when we stopped seeing gods and spirits in nature, but when we stopped seeing our essential connection to nature, when we lost what Morris Berman calls our “participating consciousness”. And so I don’t think extending “individual rights” to rivers and trees is going to re-enchant the world. Rather, we need to realize our essential oneness, the manifold ways in which we are connected to the rivers and the trees — whether or not we find gods in them.

You know what is not magical? The Borg. Collective Identity politics. Hiveminds.

You can’t make the world magical by making everyone or everything the same. Nor can you make it magical by denying the individual beings who exist in this world. Each tree is beautiful because it grows its own way. If all trees were identical, what would it matter if some were lost? There’s millions of exact copies. If all people were identical, what would it matter if some died horribly, there’s plenty more exact same copies out there. If every painting were the same, where would be the wonder of Van Goh, Picasso, Michelangelo, or Raphael? The individual is magical.

And so it is too, with Gods.