In Part 1, Halstead decided to go Full Bigot in terms of Christian fundamentalists, insist that paganism wasn’t being politicized, and insist that Pagans need to get political in order to fight off the power of the Christian Right rather than follow “Beckett the idiot” into journeys of piety and self discovery.

So today we’ll continue Halstead’s post: Fiddling With The Gods While Rome Burns.  By starting with his section Pagan Pietism.

Oh gods, where to even start here. Like, I’m not even sure I have the words here. Does Halstead think Culture is a single thing? Like in a culture there can only be one principle. You can be monotheistic, or atheistic, but you can’t have the two together inter-playing.

Wow, my brain is actually hurting from this level of….is this ignorance, stupidity, or what? I really am having trouble grasping out a man insisting we get involved in politics can have such an insignificant grasp of what culture is.

I think I’m just gonna leave it at that for now before I have an aneurysm from sheer stupidity.

In any case, what Beckett is describing is a kind of Pagan Pietism.  Christian Pietism was a movement which emphasized personal holiness and devotion to God.  Contemporary Evangelical Christianity has its roots in the Pietist movement.  Today, Christian fundamentalists talk about “the world” in the same way that Beckett does, except their unholy triumvirate is paganism, atheism, and consumerism.  Beckett had merely substituted monotheism for polytheism.

Honestly, not seeing what’s so bad about this. Personally, anyways. Admittedly, I like consumerism, but then I’m my Dionysian than Apollonian in my tastes on how to live life.

Also, love that language choice “unholy triumvirate.” Yeah, that’s not leading or prejudiced language at all. I know he’s saying that “these were the unholy things” to the Christians but still. and really, I thought Halstead was against consumerism anyways, so why is he complaining about it being on the “bad” list?

Well, to be honest I find that a much more palatible option than the position taken by Environmentalists like Halstead and Marxists like Rhyd which is: The on this world is too evil to be saved, so we must destroy everything in order to save the world.

Look Beckett is advocating what I have championed all along. If you do not like something, you do not have to be a part of it. But you do not have the right to dictate how other people live their lives. “Being in the world, but not of the world” is perfectly acceptable as a theological or philosophical position. Hel, I have elements of that in my own personal life. But Halstead here is basically saying “you can’t do that, that’s evil, you have to be in the world, and of the world, in the way I dictate and doing as I insist or you’re part of the evil that’s destroying this world.”

This is what I talked about in my Affirming post. Beckett is Affirming his religion. Halstead is angry and calling him names because he is not Affirming Halstead’s religion. But despite all the names and terribly put together argument, Halstead is not in the right here.

Beckett’s recommendations — making offering, meditating, and taking nature walks — are all good things to do.  But if that is all we do, then Beckett will most definitely be right — we will not change the world.  Beckett’s analysis is a self-fulfilling prophecy.  The world is too big — it’s
“really, really strong,” he says — so we should stop trying, turn inward, and cultivate our own holiness.

You know what I’ve found about people who devote their entire existence to trying to change the world?

a) The job is never done. There is always some new fight to be had, some new villain to defeat, or some old villain who you haven’t completely annihilated yet and you hate it.

b) they tend to be insanely unhappy. Like 24/7 miserable. Because the longer they focus on all the “problems” of the world, and the longer they fight against those problems, the more hopeless it becomes. People go from being “ignorant” to being “wrong” to “upholding evil systems of oppression” to “Being evil.” And no amount of fighting will ever purge the evil. A slightly extreme example of this is say Stalin, who up until his death was still “purging” heretics and evil capitalists from his nation.

c) Eventually, you become as bad as the people you were fighting. You either die a hero, or you live long enough to see yourself become the villain. And then you become even more villainous as you attempt to destroy that realization and anyone who hints at it.

I think changing ourselves is a good place to start — we should “be the change” — but it is terrible place to stop.

Beckett is right that we can’t change the world by ourselves — that’s why we need to work together.  It’s been overused, but this quote is still true: “a small group of thoughtful, committed citizens can change the world; indeed, it’s the only thing that ever has.”  Let’s build out inner resources, like Beckett says, but let’s build for the benefit of the world.  We need justice warriors, not navel gazers (and I say this as someone prone to navel gazing myself).

You know who I think is the most successful champions of “justice” in the world?

If you say Rome, good guess, but no. While Rome only ever went to war when that war was Just (well, just by Roman standards), it is not Rome I think of when I think of the most just people on this world.

Yeah, the ultimate “navel gazers” who do not go out, they do not fight, they don’t even really champion anything. The guys who at their most extreme religiously will not walk on grass because it harms a living thing. And you want to know why I think they’re the most successful champions of justice?

Because of that. They don’t go around saying “this is evil,” or “this is haram” or “this is sexist/racist,” or any of that business. When a monk goes to a protest, he doesn’t raise his voice, or throw his fists, or demand that people bow to his viewpoints. He sits there, in meditation, a living example of calm that calls people to lower their voices, drop their fists, and sit down. To remember the innate humanity of both sides of the issue and to come to peaceful agreement. Buddhism is a religion that spread all across Asia…and it never needed a sword to do it. It never needed “justice warriors” to teach people the right way to be.

Beckett is basically advocating for Pagan Monkhood. To remove ourselves from the problems of the world and improve ourselves. With that improvement, through our daily lives, we show the world something holier than there was before. This in turn, inspires other people to do the same. Not by force, but by inner peace.

As opposed to the position Halstead is taking which calls for “warriors of justice” to rise up and reshape the world as they see fit. Which sounds lot like something I read about in my history classes…what was that….oh yeah.

If It Doesn’t Help Me Save This World …

Almost exactly a year ago, I wrote a post entitled “If It Doesn’t Help Me Save This World, I Don’t Want Your Polytheist Revolution.” It was in response to abother post by Beckett about “putting the gods first.”  Beckett wrote,

“Our this-world concerns are enormous.  They’re here, in front of us, right now.  They demand our attention, they demand our time, they demand our effort.  And they never end.  If we are not mindful, if we are not – dare I say it – devout and pious, it is all too easy to let our this-world concerns become our gods and take Their place in our lives. … When we don’t keep the Gods at the forefront of our practice, we put something else there.  That something else may be helpful or it may be a distraction, but whatever it is weakens our relationships with the Gods …”

And I remember almost a exactly a year ago I proceeded to join in on leveling an unholy (or holy?) beatdown upon your ass for what you said in that post, with sharp logics and dank memes, as you tried to argue for the removal of the Gods from Paganism and the substitution of politics for the divine.

I found this disturbing.  To me, it sounded too much like the Christianity Pietism I was raised with (he even used the word “pious”) with its rejection of this world and its condemnation of the “gods of this world.”  I was very critical of Beckett’s post, but someone convinced me that Beckett was just talking about self-care, the idea that, if we don’t look after our own spiritual needs, we won’t have the resources to give back to the world.  It was a generous reading of Beckett’s post … and it was wrong.

Of course he did, because he’s an ideological bigot who can’t stand the idea that people might believe different things or have different priorities. Because Halstead (and maybe a few of his friends) are Right and everyone else is automatically wrong because they believe something different.

I mean, Beckett may be arguing for a Christian style “piety” but Halstead is the one acting like he claims all Christians do.

Now I am convinced that my original response was right.  What Beckett has been describing with increasing clarity over the past several years is a kind of Pagan Pietism, if not a Pagan fundamentalism, which advocates withdrawing from the world, giving up the fight for justice, and cultivating personal piety instead.  Beckett delivers this message with the soothing assurance of a village priest — and with many a caveat that he can fall back on when challenged.  But his destination is clear, and the place Beckett describes — a place of retreat and resignation — is not a place we Pagans should be following him.

At least a Christian can be reasoned with over the values of peace and mercy.

So here we have Beckett, basically championing a monastic style of worship. Focusing on one’s self, one’s religion, and one’s gods rather than being sucked into the morass that is political violence. Basically, Buddha (or even Christ).

And then we have Halstead, who is championing a politically motivated life of enforcing your morals and sense of justice upon the world, the purging of evil, and the destruction of those who violate the tenants of your belief. Basically, Mohammad.

But remember kids, the path of Beckett is not someplace Paganism needs to go. Because Halstead has decreed it immoral. You shouldn’t retreat from the world to make yourself a better person, no, you need to go out there and force everyone else to be better people dammit. That’s the only way to be a good person and make the world a better place! Because if you don’t, the world is going to burn (or flood, not sure), and damn it these fundy Christians still think they should have a voice in a democracy, and people want jobs but that destroys the planet, and I am the only one who knows right from wrong and you have to do as I say and make my vision come true or you are everything wrong and evil with the world and your gods are stupid poppy heads and I’m smarther than all you mother fuckers!!!! Deus Vult, infidels, DEUS VULT DAMMIT! 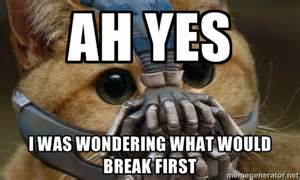