So in the papers (and web) today (and the last few days I guess), I’ve been seeing the Media and many left wing folks cheering at how “Donald Trump has suffered his first defeat” with the health bill Ryan was trying to put forth dying an honorless death. 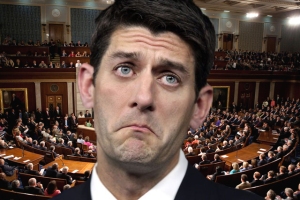 And I mean, who can blame them. They’ve had their collective asses handed to them repeatedly since the election happened, and the ass kicking has only gotten worse since Trump actually took office and kept most of his campaign promises…in the first month.

Honestly, I haven’t seen an asskicking this hard or successful since Germany invaded France in WW2. Seriously, Not even the epic church fight in Kingsman was this brutal.

So I really, really can’t blame them for cheering at this health care bill Ryan was putting forth dying. It’s the closest thing they’ve actually had to a “Win” in months. I mean, it’s not really a win for them (more a failure for Ryan), but still.

Except…it’s still not a defeat for Trump. In fact, it might be a major win for Trump. 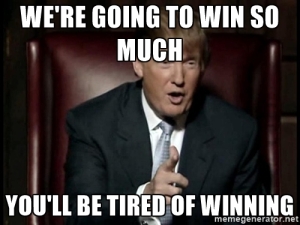 Okay, for those outside the US and even for those inside the US, there’s something most people don’t realize. The US is not, truly, a two party nation. Oh sure, we’ve only really got two major political parties, and they’re the Democrats and the Republicans.

But in reality, these two parties are actually closer to six political parties, who just happen to exist as two. On the Left you have the far left progressives, you have some folks in the center who are actually Democrats, and then you have what are called Blue Dog democrats (who are basically centrests who lean left, but will occasionally work with the Right). Then on the right you have folks who could basically be considered Alt-Right (which the alt-right fall into), you have Conservatives, and then you have what are called RINOs. RINOS are “republicans in name only,” and are similar in nature to the “Bluedog” Democrats. Center, leaning slightly right, but more than willing to work with the “left.”

Ryan is considered by many to be a RINO. In fact, what I’ve read of the Health Care Bill he was putting forth sounded basically like “ObamaCare Lite.” Which, like most lite beers, is virtually the same thing, only shittier, as a beer. And while Ryan’s bill might have gotten rid of some of the odious things about Obamacare, it was still close enough that no one outside of Ryan’s circle wanted it. Hence why he was having so much trouble getting other Republicans to sign off on it.

Most Republicans, and Trumps supporters, want a few basic things when it comes to Healthcare.

1) Get rid of Obamacare totally. It’s shit, the idea was shit, the execution was a landfill’s worth of shit, and it can’t even sustain itself no matter how badly you punish people for not supporting it.

3) open Healthcare insurance to interstate sales. Before Obamacare (and even during), health insurance companies were forced to sell in only one state, and consumers could only buy in their state. This may not sound like its all that bad, but as anyone who has to get cable will tell you…limitations breed control. Internally, the insurance companies could all agree on certain pricing, and there wasn’t a damn thing you could do about it. It also meant that even companies that spanned several states, couldn’t help out the branches in different states. Opening up interstate sales would mean that a) companies could support themselves and spread profits around so that they could lower prices and b) insurance companies could compete along state lines, meaning no more price fixing, you can literally under-cut the competition. Which is always good for buyers.

Ryans bill…did almost none of that. It might have worked to make Obamacare smaller and more sustainable, but that’s like taking out the moldy seats in a beater. Sure, you’ve gotten rid of some of the problems, but the car is still shit and all you’ve done is make everyone lose their seat.

On top of this, Ryan (I do believe) was part of the Never Trump movement that tried to influence the Republican side of the election. And what happens to be one of the big things coming from this failed bill?

A lot of people on the Right insisting Ryan be removed as Speaker.

So…basically they’re wanting the biggest opponent of Trump on the right to be axed. And while it’s too soon to say one way or the other…yeah. If Ryan isn’t gone, he’s going to be severely weakened. I mean, he just tried to get his big play to go, fumbled, and then Trump came along and said “play it where it lies, boy.”

So while the Media and Left cheer at Trump lost, on the Right the only thing that really happened was Ryan showed he cannot unite and lead the Republicans in the Republican controlled Congress. 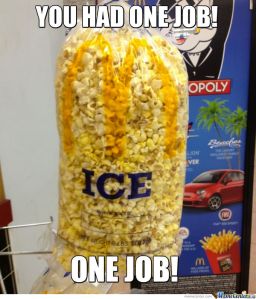 And this was just the excuse to give that job to someone else who can do it. Which, frankly, I think will happen. Or at least, Ryan will be forced to follow Trump’s wishes, which will do a lot to unify. Because the beliefs of Trump heavily influenced the election, and who got elected. It also goes a long way to letting Republicans know what they have to do to stay in power. Because the mandate has been given, and the people will no longer tolerate the behavior many Republicans have been engaging in the last few years.

So to all the lefties out there. Don’t celebrate just yet. This may not be what you think it is.