A week or so ago I was driving around with my dad and we were listening to talk radio (he likes that stuff), and Mark Levin was on. A guy called in and they were talking about the state of the Right, and the guy said something along the lines of “we need leaders and you conservative talk show guys should step up.” To which Levin forcefully (almost angrily) replied: “NO, YOU THE PEOPLE NEED TO STAND UP!”

He completely passed the buck of responsibility.

Now, I can sort of understand Levin’s position. The Right (well, New Right as I put it) is very much the old right way of individualism. Every man must stand up for himself, collectivism is bad, etc. Why ask someone else to do the job when you should be doing it yourself.

That being said, I personally sided with the caller on this one. Conservative talk show hosts are some of a very, very few who manage to get conservative views out there. Their reach is vast, their power (while no where near that of MSM) is not to be underestimated. I’ve heard Rush drop some redpills that no doubt reached millions. These are men of power and influence, who could be of great value. They know how to speak to the populace. And the simple fact is that the Left has gotten where they are because they had Leaders who led people with singular vision towards desired goals. The Right hasn’t had shit like that until Trump came along…and that’s one of the reasons Trump was so successful. He was a leader who showed the way.

I’ve also joined a group headed by Steven McNallen (something I’d never thought I’d end up doing). It’s not much, just a facebook group, but its very much, well…a meme is probably the easiest way to put it: 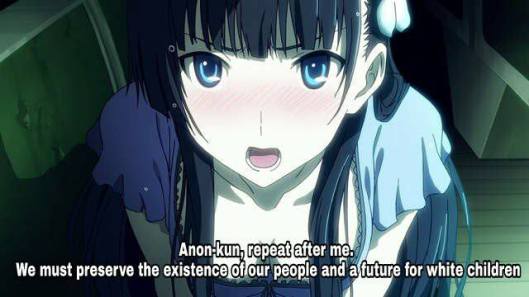 McNallen is by no means 88, but I suspect the years have made him very much 14. Which, is fine. It’s taken me years, but I have come to the conclusion that the 14 is very much needed. After all, we’ve only got about 30 years before Europeans are a minority in their own nations, and 50 years at best before that happens in the USA. Even as we speak, Europe and the USA are rapidly shifting to “developing country status.” Even our history is being erased and rewritten.

But as I look out at talk radio, various facebook groups, and other places, I find myself with a dilemma. More and more people are waking up to the fact that drastic, possibly terminal issues, are on the horizon and rapidly coming towards us. Thankfully, there are many conversations about how we cannot allow this to happen, and even a number of conversations about the best solution to deal with the problem, but there is one conversation I don’t see happening.

How far are you (a person) willing to go?

Mark Levin clearly showed his answer to me: no where. He’s got his comfy radio job and his book writing and that’s all he’s going to do. He will be prophet telling of the apocalypse, but he will not lead them in dealing with it. That’s for other people, he doesn’t want to risk what he has for the sake of others. It’s not his responsibility. And he lambasts those who do take up the responsibility in ways he doesn’t like.

So he will not lead, and he will denounce those he will not follow. Which, okay. He’s Jewish, last thing he wants is for a “white nationalist” movement to come out, look at the Privilege of the Jewish community, and then go “Juden Out.” I can’t blame a man for self preservation, but I can find it funny that a man screaming “do something” suddenly shouts “oy vey, goyim no!!!!”

Looking at others though, I do have to ask the same question. The situation is dire, and the number of solutions is rapidly diminishing. In McNallen’s group, and /pol/ and a number of other places I see “the existence of our people is non-negotiable.” But while we’re not willing to negotiate it…what are we really willing to do to preserve it? How far are we willing to go?

Are we willing to have more children? Certainly this is probably the most peaceful option, but it has serious roadblocks to it. Some of us are too old to have children. There’s a very significant gender gap between “redpilled” men and women. There’s also the fact that financially, it’s hard to even get married these days, much less have 2 kids, which is the minimum needed to retain current population levels. On top of that, in order to retain majority status, each couple would need to have closer to 5-6 kids (assuming all of us could get married, which we can’t) and probably closer to 10 kids in order to make up the difference for those who couldn’t marry and reproduce. That would necessitate a stay at home wife…leaving the man to support 11 people on a salary that generally can’t even support one. How many women, even those that support the preservation of our people, are willing to make the sacrifice of having 10 kids? Much less having 10 kids in poverty, which…would probably do more to hurt our people in the long run. And that’s even assuming the 10 kids would retain the redpilled status of their parents. Government education would probably see at least half of them flip over to the “anti-white” side of things. And even then it would be a miracle to have an effect in time. Europe has 30 years, and even if every ethnic European started pumping out 5-6 kids, I don’t know that it would keep up with the Muslim birthrates and immigration rates.

What about going into politics? Well, that option is shot. 90% of the wealthy who would fund a candidate are hard left supporters or Soft Right supporters. The only reason Trump managed to even have a campaign is because he pretty much self funded due to his own wealth. Anyone else will be owned by their financial backers, which would instantly pull the teeth of a candidate willing to engage in politics of preservation. And, given the Republic we live in, we would need a serious number of candidates who didn’t have to compromise in order to effect policy. Just look at Trump, he’s managed to do a lot with what he can, but most of that can be undone by the next guy with a pen and the paper. Lasting changes need Congress, and congress is cuckolded. Politics is the next peaceful way after reproduction, but at this point it isn’t any more viable. While nationalist politicians are making progress…I don’t know that said progress will happen in time, much less time to prevent the necessity of violent solutions.

Simply put, we must consider that violent solutions will be the only solutions, in which case we have to ask how far we each are individually willing to go. If say in 30 years European natives are a minority in their own lands…there will be only two options. They violently fight back against the inevitable oppression or they surrender to it. One need only look at South Africa and other African countries to see what surrender looks like. By that time I will be in my 60’s, well past fighting prime. Most of us will either be in the same boat, or past it.

So…are we willing to make the children fight the battles? Will we force them to fight a war we ourselves were too cowardly to fight ourselves? We are already suffering under the burdens our parents were unwilling to shoulder, and we complain mighty against their weakness. Are we to be even worse than them? They placed us under crushing economic burdens…will we saddle our children with both crushing economic burdens as well as genocidally violent burdens as well? Will we force them to face both poverty and extermination at the same time?

That…doesn’t feel right to me, and I don’t even have children yet.

Will you carry that burden? Will you make our children? Who will you make shoulder the burden of leading such things? Will you demand others do it for your, will you do it yourself, or will you make no one and allow what happens to happen without protest and resistance?

There’s a saying in the Heathen community:  Everyone wants to be a vikingr until its time to go aviking. Various forms of this phrase exist in other communities. But it’s meaning is universal. Everyone wants to talk big about how they are, but when it’s time to be, they all vanish.

We’re reaching the point where we can’t do that anymore. We’ve either got to step up and make more of us or less of the other guys. It ain’t right, it ain’t what we wanted, but everyone else stepped aside. Our Parents, our grandparents. At any point in time in the last eighty years, this could have been prevented. Everyone else didn’t want the burden, so they took the gold and left the debt. Now we have to pay, or we make our children pay even worse than we would need to.

This could mean losing our jobs. Our homes. Our lives even. Our very humanity. But it is the burden the Gods have given us. Will we be faithful and honorable, and pay our dues to protect our children and people…or will we speak of piety and kin and leave the burned for the next generation. What might well be the last generation for all intents and purposes. The Gods have placed this trial before us. They await to see what we are willing to do…or what we demand others do for us because we will not.

How far will you go?