Recently, a Fox News opinions host named Tucker Carlson had his home attacked by what can best be described as an angry mob. What supposedly started as a protest rapidly turned into an all out assault upon his home, which as I understand it, only stopped with the arrival of the police. Tucker’s wife was home at the time and hid in the pantry as the attackers battered the door, managing to break it but not enough to gain entry into the home by the time the cops arrived.

Who knows what would have happened if the mob had actually managed to gain entry. Vandalism for certain. Assault and murder certainly possible. The mob was supposedly made up of member of Anti-Fa, and they have certainly shown a willingness (if not a great capacity of skill) to murder in the name of their cause.

Truth is, this could have all been prevented. If, a couple years ago, Anti-fa had been ruthlessly crushed, it’s members had been made an example of, and its actions uniformly denounced, we might not be in this state. But the fact is, not only did none of those things happened, they were praised, lauded as heroes, and those that protested their actions were labeled the villains instead. And, as the last couple years have passed, well, we’ve seen violence denounced unevenly, creating a lesson not that one side was evil and the other was good, but that violence was acceptable it was merely certain people who were “evil.”

Thus the left has learned that violence makes them heroes, and the right has learned they have no rights in the eyes of the left so of what consequence is their own violence? After all, if you are little more than a beast to be slaughtered, what good is there in going peacefully. The fact that the best examples we have of right wing violence in the whole span of the last two years include obviously fake bombs, an automobile homicide in which the car never actually touched the person killed, and a lone gunman shooting up a synagogue, vs the attempted murder of multiple republican congressmen, the attempted murder of several people protesting antifa (the bike lock case being the most famous which ended in a virtual acquittal of the attempted murderer), several other incidents of near lethal violence, and in the case of the Charlottesville protest, assaults with multiple deadly weapons including flamethrowers.

It has taken two years for the right wing to finally start producing on a tiny scale, the violence the left has shown since the election of Trump.

I recently watched a video on youtube about a potential Civil War and how it would play out. It’s not a bad video, and shows the actual landscape of red vs blue areas which shows just how much of the landmass the Right has. Included below is one I found covering 2016. 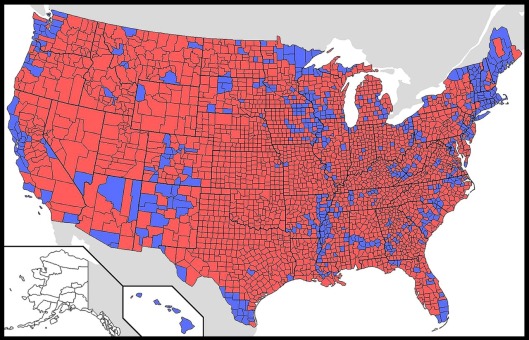 The primary thing that this map doesn’t show is that those areas that are blue are largely cities or counties that have large cities, while the red areas are mostly rural. However, they do tend to even out population wise, with the red areas having a slightly larger population if I remember correctly. The video I linked goes on about the war as it will likely be “unconventional” in terms of historic wars, but it does still approach the issue as if it would be a normal civil war. But the video approaches things through the paradigm of “republican vs democrat.”

The coming civil war is often a topic of interest on /pol/ who tend to view how it will work out somewhat differently.

While a lot of alt-right places like to meme “one side has a hundred guns, the other has a hundred genders,” many /pol/acks do admit that as far as the left goes, they do present a viable threat of violence. Certainly, the most common faces of leftist violence are anti-fa and progressives, generally known for their hatred of all things guns, but were civil war to break out, it is highly likely that the left would have a large force of decently armed fighters in the forms of black and latino gang members, likely working as mercenary forces hired by democratic leaders. And as crime statistics show, gangs do excel when it comes to violence and killing.

It would not be a conventional war. We all think of wars as armies racing around, forming lines with soldiers and tanks, shooting at each other until someone gives up, and then moving on to the next target. But if we look at the primary forces of both sides at this point (the point when the war would start) neither side has anything like that. The left has groups like antifa and could hire gang members. The right would largely be made up of “rednecks with guns.” Neither side is going to line up and shoot each other volley style. Gang members typically like to use “drive-bys” where they attack with surprise and flee with speed. Ironically most on the right would use similar tactics, though to be honest they would likely fight more with VC standard tactics. Many of them had family who fought Charley, and they learned a few tricks, don’t you know.

One of the greatest weaknesses the political left has when it comes to a civil war is area control. Most of them are centered in the cities, and very large cities at that. I forget the exact numbers from one of the threads, but on a basic level it would only take about a hundred men and maybe a couple hundred pounds of explosives (and not even the fancy kind) to render the cities incapable of being resupplied by land. A similar number of men could shut off water to the entire state of California, rendering it uninhabitable within a matter of days, an internal warzone within weeks, and without aid, a ghost town within half a year at best.

And yes, while the elites of the democratic left would be able to flee such zones easily, we do live in a democracy/republic. without votes, they have nothing. The destruction of California’s leftists would render the party as good as dead for decades if not permanently. Combine that with the destruction of major cities like Chicago, Miami, and even New York city by nothing more than sieges alone, and the power of the Left would be destroyed forever. This could be accomplished by less than half a million people.

However, I doubt it would go so cleanly. While California would likely fall with ease, the other areas would likely be able to send out forces to try and capture and secure areas. how well this would work, and to what scale this would grow is impossible for me to say. The cities would be a blood bath, however, as leftists hunt down “right wing” elements in their cities as revenge, and those fleeing would likely be shot since there would be no viable way to determine who was and was not an ally vs an enemy.

Then, of course, there is the fallout. Most of those who would end up becoming the hard core fighters of the right wing are going to be those who have come to believe that no only is peace not an option, mercy isn’t one either. Which means after the cities fall, there’s going to still be a lot of door to door “house clearing.” After all, the cities are a valuable resource, that’s why they’re there and why they’re so big. To quote Sam Hyde: “remember, when you win, these people want you dead, your children raped and brainwashed, and they think it’s funny.”

Does the military try to stop this? Does it join in? How much does the physical government play a role? Are senators and governors going to lead or is this going to be movement purely “by the people and for the people” that happens out side of our current government. Does the right or the left attempt to seize the government? DC is a very liberal dominated place, I can’t see them giving up the chance to hold hostage or even execute Republicans and other right wing figures in an attempt to seize power so they can order the military to crush the right wing. At which point the military probably would defect. Do elections resume after the war? does some figure rise up during the war as a leader who promises to fix the nation in return for “temporary” absolute power?

These are all questions that will be answered, not in some anon think tank or by “the greatest political minds” of our generation, but likely by us very people, in our very lives, likely within the next couple years. The situation with Carlson proves this. Today they broke a door. Maybe tomorrow they break in. Maybe the day after that they kill someone.

How we haven’t managed to have a flash point yet, I don’t know. Maybe it’s because we’ve been raised to think this is all impossible, in this day and age. But eventually it’s going to happen, most likely at the hands of the Left since they’ve done the vast majority of the violence, and then someone, or several people, on the right will respond. And it will snow ball from there.

War comes, and it will be unlike war we have ever truly seen here. Bellona sharpens her blades, Mars calls forth the legions, Odin is casting the runes and readying the Valkyries for another harvest, and Hela prepares her hall for a thousand feasts. What shall you do?