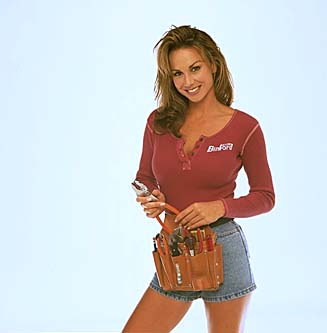 Everybody know what time it is?

It’s time again for Men’s Day Wednesday, or my attempts to define and aid men in Paganism/Heathenism!

Honestly, I tried catching the whole intro to Tool Time, but youtube let me down. So you just get a picture of Heidi. And yes, as a kid, I had a major crush on her. I think we all did.

I think I’m jumping a bit ahead of myself on this project. I’ve got a big outline of stuff to talk about, but the idea slammed into my head like a hammer, so here we are. The Nature of Men.

Of course, everyone likes to act like they know the nature of men. As if man was some uniformly identical creature. Which, really, does us a disservice as a whole. We have the stereotypes of men, but even then those stereotypes are as varied as there are people on the earth. And while sometimes stereotypes are accurate and can give us keen insights, they don’t really work that well when trying to really get down to the business of stuff.

After all, men from different cultures act differently. And within those cultures, men act differently. You have alpha males, beta males, I think you even get gamma males. And what one group thinks is manly, another thinks is the opposite of manly, and so forth.

Take for instance, stay at home dads. I wish to state here an now that there is nothing wrong with being a stay at home dad. I think such guys are lucky. Then again, most of civilization (at least agricultural civilization) men did “stay at home” doing farm work. But look at how we view it today. Some think it “manly” (of course these seem to be feminist minded people who think a woman should go out and work. So really all they’re doing is reversing gender roles on some idea of power). Other see it as really unmanly. I saw a preview for a movie about a club of dads base around either learning to take care of the kids as stay at home dads, or just taking care of them while the moms went out, had jobs and fun. I’m not sure. It just looked bad. And the only thing I could think of was “That’s what a man looks like that’s had his balls chopped off.” Of the few movies I’ve caught parts of where the guy is staying home and being the home parent, well….

None of them were what you would call manly. Except maybe that one with Vin. You can’t make Vin unmanly. But it was closer than I thought it would be.

The closes I can get are that men were bred for things like hunting, fighting, and farming. Multitasking is not something men, as a rule, are good at. I certainly am not. The closest I can come to it is being ADD enough to bounce around from thing to thing. But at work, when I’m having to do three things at once, I suck at it. And it’s not just me. Studies show this is true for most men. Which is why women get picked up more and more for office, management, and medical jobs. They can naturally multitask, and as our society crushes manufacturing, invention, skilled labor, physical labor, and other jobs, men are losing their place in the work force. Because we were bred to be strong, focused, loyal, enduring, and tough. But strength means little when you fight spreadsheets and not deer or wolves. Focus means little when it’s tracking ten things, not one. Loyalty means nothing when you can get dropped because there’s not enough money, or not enough women, at the job. Endurance means nothing when you sit in a chair for eight hours. Tough does you know good when the worst you face is a paper cut, and helps not at all when you get carpal tunnel syndrome.

For good or ill, modern society is geared towards the feminine in talent, not the masculine. Well, that’s not exactly true. It’s more like we’ve neglected and/or shipped of most of everything that had a masculine focus, while emphasizing the feminine. I may have mentioned how the shovel ready jobs thing got highjacked, and instead of putting unemployed men back to work, it got used to give more women more jobs, when only a small fraction of women had lost their jobs in the downturn compared to men.

Men, at our hearts, are both simple yet complex creatures. It depends largely on if you’re one who is a leader or a follower, but loyalty and authority are really important. No man likes to follow blindly, most don’t like to follow, but they are willing when they find a good leader. Some it’s harder than others. We like our freedom, but we recognize the need for authority and hierarchy. After all, when shit hits the fan, it’s best to know who you trust and under a good system the best guys are at the top and everyone can get done what needs to get done, without infighting or wasted time.

Guys are often highly rational and intellectual. We’ll go with our guts nine times out of ten, but feelings aren’t as important as having thought things out. A guy really has to trust another to trust that other guy’s gut. And if your best excuse for something is “that’s how I feel” you’re probably going to get laughed at. Which, sadly enough, there’s a very strong evolutionary reason for. Men didn’t get to give in and go with their feelings, not like women could. So a man didn’t want to die in battle, and he was scared. Congrats, well, you’re gonna get people killed if you leave, and the women back home would scorn you, and the men would know they could never trust you. Don’t feel like going out in the 100 degree heat? Tough, people would starve if you aren’t out there in the feel, and then good luck keeping your woman, she’d dump your ass for a better man. At all times a man had to be rational and put aside his own feelings. And that’s something that hasn’t changed. So guys, as a rule, tend to suppress their emotions, because no one wants to listen to them, no one cares, and it doesn’t matter what you feel, you gotta do what you gotta do.

Yes, there has been a push in the last decade or so for men to be “more in touch with their feelings.” Of course, there’s not been a push on society to accept this. So a man in touch with his feelings still gets ridiculed by men and women. A man who gets too emotional about stuff (unless he’s gay) is going to be made a laughing stock.

Men are what we’ve been bred to be. And it’s infuriating when this nature that we’ve been given, saddled with even, is used against us. I have lost count of the number of times I’ve heard a man lose his family because he wasn’t “emotive” enough in the way his wife wanted. Despite the fact that he was there when needed, worked over long hours to try and cover all the bills, and did his best to be a responsible husband. Many of these same women, however, look down on more emotive men as being wussy and irresponsible.

2 thoughts on “The Nature of Men Part 1”