A Heathen's Path, About Me, avatar the last airbender, heart is an awesome power, Heathen, Heathenism, Pagan, Paganism, Rants, sokka, space sword, wang fire, what kind of a lame power is heart anyways

So, I came to a realization about myself the other day.

I’m the Sokka of my group.

For those of you who don’t know, Sokka is a character from Avatar the Last Airbender (we do not speak of the movie, it doesn’t exist!). Which is about Aang, the Avatar, who can bend all four elements: Earth, Air, Fire, and Water. There’s Katara, Sokka’s sister, who is a master waterbender. Toph, the blind earthbender who is insanely powerful and talented. And Sokka, the normal guy. No powers, just a rather mis-wired brain that is good at planning, sarcasm, and meat. 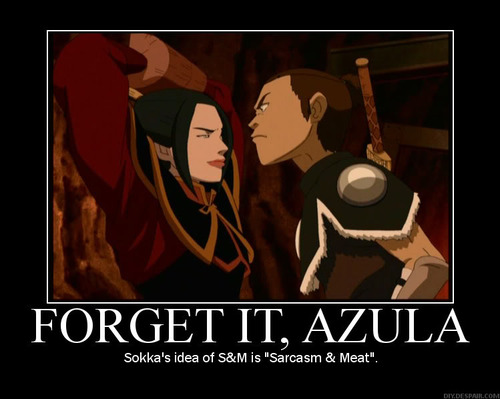 I don’t have a lot of friends, but I do have a couple. And I do have two lady loves that I care for beyond words. One friend is crazy good with computers and street racing (and wants to be a ninja). I had one friend who was a 2-3rd degree blackbelt who could leg press 1500 pounds and move faster than the eye could see. One of my lovers is super talented at sewing, planning, cooking, managing all sorts of crap, and dozens of other talents. My other lover, is a ninja who works for a big financial firm doing all sorts of complicated math stuff with a shit ton of money. My dad is a mechanical engineer.

And I…think. I’m the analytical one. But any special powers I have, I can’t seem to figure out how to use them when it comes to magic. I can plan and come up with crazy stuff. I can understand all sorts of things. But…that’s it. And while that has it’s place in a team…it’s not all that glamorous when you compare it to others.

Generally, my abilities which seem to consist of Over Thinking, and Crazy Ideas Nobody Listens Too, hit me as a big case of “What kind of lame power is heart anyways.” Most of the time the “smart guy” gets listened too, but as a rule, I don’t (there are a couple exceptions, my girls listen to me, sometimes). My co-workers don’t, bosses don’t, and even among my friends there seems to be other planners that get listened to a lot more than I (though there have been times when it has been noted I do put forth good Ideas). So part of me hopes I’ll end up growing into a case of “Heart is and Awesome power,” at least somewhere down the line.

With Sokka, he got a swords master to teach him fighting and an awesome sword made from a meteorite. It gave him the confidence to strike forwards with his unique abilities, and gave his friends new respect for him that allowed him to become more of a leader and important part of the team. Turning the joke character of two seasons in to a bad ass.

1 thought on “Being Sokka”