So, I get read by people all over the world. Literally, all over the world, I’ve got readers on every major land mass at one time or another. But most of my readers are in America, which is where I live. So we come from that perspective.

Sometimes we forget that not everyone lives as we live.

I was flipping through some news reports today and I found something fascinating and a bit disgusting. The Greeks have removed one of their Olympic Athletes, triple jumper Voula Papachristou, because of a tweet she made. This is the Tweet in question:

With so many Africans in Greece … at least the West Nile mosquitos will eat homemade food!!!

Okay, not the most tasteful of jokes. Not the worst I’ve ever heard either. For a little bit of background though, Africans have been emigrating to Europe (or at least Southern Europe like Greece) much the same way that Hispanic peoples have been immigrating to the US. However, if my news reports are correct, these folks aren’t nearly as well behaved at times. Reports are sketchy though, as Greece censors its media. Still, Greece is a tiny place compared to America, or even comparable to some of the States in the USA. So a massive influx of illegal immigrants would be even more noticeable. And, no doubt, putting a strain on the little folk of Greece, if not the big governmental elites.

Apparently Ms. Papachristou also quoted something from a “Right Wing” politician of her home land. I’m not sure what it was that person said, but it was apparently enough to get her kicked from her team before they left. Now, a young woman of talent and skill will not show them, not because she cheated, or drugs, or steroids, or any of the usual reason. But because her political views didn’t line up with what those over her thought was “appropriate.”

They kicked her out because she believed differently than they believed. And because they were afraid that those who believe as they do would get violent and protest at the Olympics. They were afraid, and so they crushed someone’s dreams and lessened their own country’s chance for glory at the very games they started. 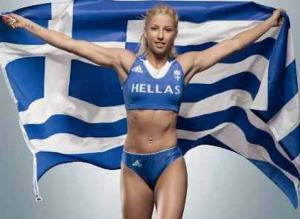 A Victim of Unfree Speech

3 thoughts on “Free Speach Is Priceless”