So, it’s kind of funny where random things will take you. Watching the Expendables 2 (which is pure liquid awesome, btw) led me to remembering a song by the name of Ultimate Showdown of Ultimate Destiny which is pretty much is the same as Expendables, only more a “let’s you and him fight” and covers pretty much everyone, not just action heroes. Which led me going to the TVTropes page about it.

Which led me to Mr. Rogers. 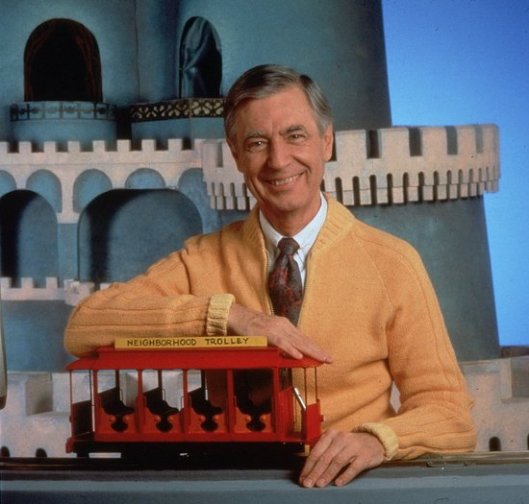 Now, I had a sheltered childhood. Like, really sheltered. There years we didn’t even have a working television for fear of it’s “evil and corrupting influences.” But even I got to see Mr. Roger’s Neighborhood and the trolley.

I think everyone who ever saw the show even once wanted one of those trolleys.

No, I don’t really remember the show. But reading over the Tropes page, learning all that stuff both about the show and the man…well it struck something. Mr. Rodger was on the air for about 30 years. He reached pretty much everyone in my generation. Hel, in a world with divorces, working parents, and lives run on the constant insistence that we be special and measure up, or being outright ignored, Mr. Rogers was about the only person out there who told all of us that “you’re special just the way you are, and people will like you for you who are.”

Idk, maybe that lesson, even if just heard once, stuck with me. During all the troubles of my mid-to late teens and early twenties, I hung onto the belief that people would like me for who I was, regardless of how messed I had become. I don’t know if that was lesson I learned from him, or just dreamed up on my own. But it’s one that stuck with me. And for all my ranting and railing about stuff, it’s still something I try to live by in day to day life. It’s why I’m part of Pagan enough. It’s why even when I dispise Christianity and Islam, I still tend to view individual people as having the potential to be good and don’t just write them off.

Because we should be liked for who we are.

It’s a shame we don’t have anyone telling us that anymore. We need it now, more than ever. And people may rant and rave that it was a well meant but stupid lesson, that it’s raised a generation full of entitled assholes who refuse to bow down and pay our dues. I disagree though. Our parents did that, while they ruined the world for those coming after. Now it’s are turn.

I think we’ll take his lesson to heart. We just have to learn it a bit better.

I leave you with a video.