So, I got to go play DnD with my friends, after weeks of missing out due to work or lack of gas.

Or work and lack of gas.

Anyways, i tend to be rather spastic with my characters. I’ve only ever played Encounters at the mall, so it was easy to switch out characters. Well, I did another switch, this time playing Durkon Helsen, Cleric of Hel. (Yes, the name is a shout out to Durkon Thundershield of the Order of the Stick). 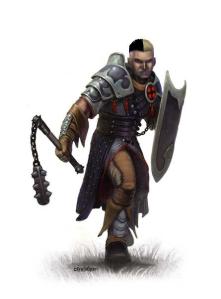 from bing, I didn’t draw this, sadly. Did alter the hair though.

And I gotta say, I loved it. The dice were nice, and not only did I manage to vaporize the charmed dead hand of a troll (apparently the sorcerer charmed it to hunt down a hobgoblin woman) I convinced its target (the said hobgoblin woman) to join the party and to have her people build a shrine to Hel with her people after we save them. 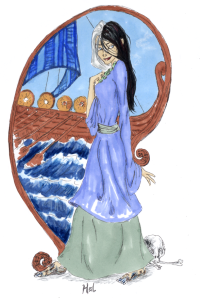 Not to mention I locked down (rendered harmless) about four undead, there by potentially saving the party, certainly saving the sorcerer, and making it a lot easier to get through the fight. All in all, a good night. Certainly, I want to play him again.

I think part of it, like I said yesterday, is that I kinda have this…well I don’t know what to call it. A “Calling” maybe. I’ve always felt like I would end up being a religious leader. When I was a little kid, it was to be a pastor. Then, when my family was going to “convert” to Judaism, it was to be a rabbi. Now, as a Heathen…it’s to be a Gothi, or a cleric, or a priest, or whatever you want to call it. I can’t say that this blog is my ministry, ’cause, frankly it would fail epically if classified anywhere like that. Especially when I see blogs like Asatru Community which I’ve re-posted from.

So, maybe, playing the cleric is a way to get in touch with that and fulfill it a bit. And maybe training. We’ll see.

Maybe someday I’ll get to be one in real life. That…would be cool. No idea if I’d be a general one, or dedicated to a certain deity. But we’ll see.

2 thoughts on “(Playing) A Cleric of Hel”