My birthday was this week, and despite being over exhausted to the point where I’m falling asleep in my chair every five minutes, it’s not gone too bad. But R got me a really awesome present in the form of a Steampunk Tarot deck. Those who know me know I generally stick to the runes, and that I am generally not interested in tarot. But I’d found this deck and for some reason it called to me.

I haven’t used it yet. But the bright side is that it hasn’t rejected me like every other tarot deck I’ve run into. And here below I’m gonna show some images of it. Every card has a unique art, which is awesome, because apparently some like to cheapen out on the number cards.

Can’t wait to try and use it. 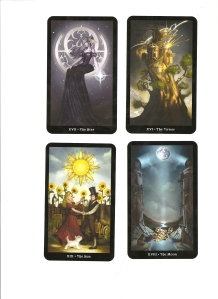