So I mentioned the other day that I got into a conversation with a couple people about the whole religious rights vs gay rights. My primary debate partner was someone who stuck to their guns and fought tenaciously for their point of view, impressing me with their will to hold to what they believed. I had hope that I had come across someone who had done a great deal of moral philosophy to come to his conclusion that the rights of gay people to make people provide them with services trumped the rights of religious people to live by their conscience. I hungered for this wisdom, and I pushed and pushed and pushed and finally found out why.

He’s part of the majority, and the majority feels that way, and so the majority has the right to enforce their view on the matter on others, regardless of what rights those other people have. He then sneered at me for being “anti-social” and not being willing to live by the morality of the majority.

All the fun, pleasure, enjoyment and glory of the fight died in that instant. Life it seems, it is not without a sense of humor. A man fighting for the rights of a minority doing so because it is the will of the majority and thus trampling the rights of others who are in the minority, and then mocking the very attitude that has made it so that minorities even have rights against the will of the majority. My opponent was nothing more than the very thing he claimed to be against. I had battled my way across a field of strong foes, only for the last one to pull out his gun and shoot himself in the head.

Because that’s what this was, my foe had committed intellectual suicide. No great moral quest that had made him come to the conclusion that the GLBT has the right to trample others in order to have equal rights. No moral conviction that the law should be the source of our morality (in fact, the man didn’t even seem to grasp what laws were). Just an inherent insistence that religion and its morals had no place in law, and that the will of the majority has the right to trample the minority.

I’m sorry, but I can’t support that, because that means that once again my people get crushed, banned, and hunted down. I live by a few codes, but one can best be summed up like this: 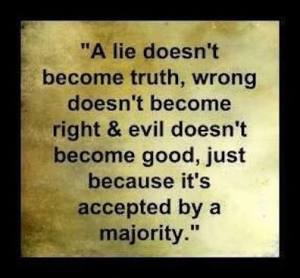 That man’s logic leads to some very dark and dangerous places. If that is the measure of the GLBT community’s support, that because they are the many they deserve to crush others, then I fear not just for my Pagan and Heathen kin, but for the rights of all peoples. If simple numbers are the deciding factor of respect and morality, then with all the gender and racial differences out there we’d be at the whim of the most numerous rather than the idea of equality. Already there are reports of more and more black religious leaders calling out Obama and Holder for not protecting traditional marriage. What happens if the highly religious Black community joined together with the highly religious Hispanic community to stand against Gay marriage and gay rights. I’m pretty sure those two rapidly growing groups could form a majority and push back. Then what happens? Gays loose their rights to the majority? What about Pagans?

Majority rule is not morality rule. It is mob rule, and mob rule generally ends badly for everyone.

1 thought on “Way to Kill the Troll Boner”