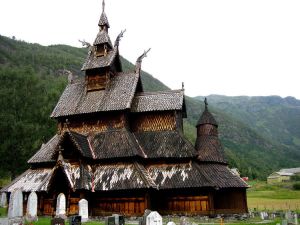 So there’s a bit going around the various Pagan blogs about wanting to set up Temples and Shrines, and if this is needed, not needed, or simply wanted. I suspect this is coming from two general areas. 1) Iceland is getting its first official Heathen Temple in nearly 1000 years. 2) I suspect the Gods feel we have finally reached the point where our numbers and resources to which we can start bringing this about.

Cara Shultz over at the Wild Hunt had a couple wonderful article about the history of some Temples and why they worked or failed. My own friend Drew Jacobs of Rogue Priest had founded a temple, though he shut it down (something I knew about at the time of the shutting down, though I didn’t know the full story). It shows the power of an individual to create something, but also to destroy it. Something to be mindful of when we talk about building Shrines and Temples.

But I do think we should start looking into it,

Frankly, it’s hard for me to go into certain places like Sears, Sam’s Club, or elsewhere, and not look at those little outbuildings and want to buy one. Why? Because I want to build a shrine to Hel. I’d love to build a temple, but that’s something far, far outside my budget at this time. A shrine, really, is out as well, because I do not have a place to set it up.

But I think one could build a nice shrine for under $1000 dollars. And that’s everything, included (most of the premade structers seem to be about $500ish, and then a few hundred for a goodly sized idol). Once could make an acceptable shrine for probably as little as $2-300. Then all one needs is a place to set it up.

A temple would be a much more expensive prospect, but then again that’s mostly because of space. Still, a few thousand a month could probably do it, depending on rent. Costly, but when you think about…hardly an expense that wouldn’t be worth it.

Because one of the biggest problems we’ve had with Paganism is the fact that we do not have buildings and locations. Bookstores were the number one location we all tended to gather, but they’re shutting down. My own home town, one of the largest cities in my state, now has no pagan stores in it. There is literally no physical location we can meet on a permanent basis.

And sure, we can rent out parks and stuff for our festivals, but that gets tricky, expensive, and can get canceled at the last moment. Plus, those places are public, trampled upon, with all manner of energies being wafted and carried about. Each time we go we have to spend time and energy to make the place sacred…only for it to become profane once again.

Making it all but useless as place of power for our Gods.

Like believers, the Gods need physical, enduring locations for their power to focus and flow from. That’s what temples were for, and shrines. Built at places important to the Gods and Goddesses, to enhance Their power in those places, so that Their power might flow over the land better.

Most of us have shrines in our homes. These are for us, our families, and they are important and good. But we need to grow beyond that. We need to begin building temples and shrines out there in the public world where people can come.

How much easier would it be if when we first found out about this stuff, if there had been a shrine or a temple we could go to, to learn from? How much easier would it be for our practices if we could come together in a set place to make our offerings? And put together our funds for better offerings, better equipment, and so forth? A place where those with questions could go and ask a Priest or Priestess what a God or Goddess believed in, wanted, stood for?

I think it would be amazing.

But I also realize that the main reason we don’t have that is the same reason we don’t have Pagan Leaders, not like other minority religions with lesser numbers than we do (after all, Pagans are clocked in at a potential 1 million+ in number, making us one of the largest minority religions). Because Pagans cannot stand to have someone with a different view on things from them be heard and in power. It’s a bit hilarious, that a religion all about personal morality and belief has one of the biggest problems with people shouting “heretic” and ripping down those who rise above. We’ve seen it over and over again.

But I think that shrines and temples could be a way to solve that. They would have Priests and Priestesses whose sole focus would be to tend to the holy place, oversee the offerings, and commune with the gods. They would not act as leaders of the community, only voices of the Gods. Let others lead, based on “spiritual cred” or how highly they were titled. Let leaders be based on merit and skill, separate from their holiness. By all means, let them be highly religious, but let not leaders dictate the rites of priests, and priests dictate the rites of leaders. Then we could have people who could dedicate themselves to their spiritual advancement and the spiritual advancements of our peoples and religions, capable of working with other religious leaders…and then we can have dedicated people to deal with the politicians and other public people, who can spend their time and energy on those areas, rather than having one group of people trying to split their energies in two very opposite directions, at the cost of both.

There was a reason Pagan societies had Kings and Priests. We need both, and I believe that starting to build shrines and temples is our first step to both, and effective ones at that. Because I want to run and do a temple, but I do not desire the politics and cruelties of political leadership amongst pagans.

1 thought on “Building Temples and Shrines”