Predictably, they are now being attacked by the GLBT community and its “allies.”

George Takei even posted on his facebook about it being an act of bigotry and so forth. To which I was forced to paraphrase the competing Sci-Fi giant: “Who is more bigoted, the bigot or the bigot who is bigoted against him?”

And you know what, listening to all this stuff ripping the law apart, really, really pisses me off. Why?

Well, I’ve written about this before, back when Arizona was working on their law. And it makes me feel that no matter how much religious people come out to support equal rights for the GLBT community, they have no respect for our rights. By all accordance, all this law does is allow a person or persons to argue in a court of law that they should not be forced to violate the tenants of their belief by the state or other persons. And you know what? That’s good. If a church wants to offer communion wine to those under 21, that’s okay, they should be allowed to argue for that. If a religious order wants to be able to smoke weed as part of their religion, they should have the right to a trial to be allowed to practice their religion. If Pagans and Heathens want to offer an animal sacrifice, they should be able to make a case legally if the State tries to stop them. Frankly, I don’t think they should have to have a court trial, but at least now they have the option where as before the state could dictate religious practice.

That is largely what this law is for.

Now, could the law be used to let a Christian shop owner not have to provide for say a Gay wedding? Sure, it probably could.

But this law is what lets a Native American keep his eagle feathers, what lets a Muslim or Heathen have a beard in prison, and Pagans have access to religious rites and priests in prison. This law could be the way to spearheading polygamous marriages (which would only help the road to gay marriage, though surprisingly gay people do not support that style of marriage. Irony).

So does an attempt to prevent an evil that might not happen, and would not work, worth silencing something that could only be good for religions, especially minority religions like the various Pagan or Heathen branches?

I don’t think so.

And that’s something that’s pissing me off, is so many Pagan blogs out there are screaming, screaming about how bad this law is, but this law can only really help Pagans living in that state. After all, it means that we are protected in our religious practices. If we want to build a temple, and someone in the government or outside tries to stop us…we have a law that lets us argue we need a temple and whatever practices that happen within it! With the major push for a growth of shrines and temples taking the Pagan blogs by storm, why in Helheim are we screaming about a law that would help us?

This is going to sound bad, but: WHEN DID SOMEONE WHO BASES THEIR LIFE AROUND WHO THEY FUCK GET TO DECIDE HOW I CAN LIVE MY LIFE BETTER THAN MYSELF OR MY GODS!

Why, because my Gods are invisible? Because religion is a choice? FUCK YOU.

Now, I support equal rights for GLBT people. I even believe in Gay Marriage. BUT I DO NOT BELIEVE THEY HAVE THE RIGHT TO DICTATE MY RELIGIOUS PRACTICES EVEN IF THEY FIND THEM OFFENSIVE!!!!

And that is exactly, exactly, what they are doing by protesting this law and attempting to get the state government to either abandon it or change it.  They are saying “your practices offend me, you cannot do them,” while at the same time going about saying “my pracitces offend you? Too bad, you fucking homophobe, I can do what I want!”

No wonder Loki is the fucking god of these people…

You know what this makes me want to do? It makes me want to go up to all those “homophobic” Christians and apologize. Because really, I’m sorry. They get so much shit thrown at them, and it turns out that the people they hate…are no different from them. They’re just as bigoted, just as supremacist, and just as hateful. They insist we cannot dictate their lives based on region, but then they go and dictate our lives because of religion.

I believe in Justice. When Hel raised me up, that’s one of the Domains I took. I believe everyone should be treated equally, given equal respect, have an equal chance, if not an equal outcome. And all this protest, everything I see those who protest this law say, violates every single thing of Justice that I know, understand, or am.

There’s a very old saying: “Your right to extend your fist ends where my nose begins.” Its meaning is very simple. You can live your life however you like, so long as you do not violate or hinder another’s same freedom. This protest is a fist right through the nose. And sure, they can justify that punch all they like with “well, he was going to use it as an excuse not to give me what I want!”

A thief believes they have the right to take something from another person against that person’s will. That means an individuals private property or a store owner’s goods. A Thief believes they have the right to force someone to hand over their goods or labor because that thief is “entitled” to what he desires. To me, the LBGT person who would force a Christian to violate their beliefs for personal gain is no different than the highway man who pops out of the bush and shouts “Stand and deliver.”

The fact that said Christian upon refusal typically loses their life’s work because of someone’s petty entitlement pisses me off. And I have no love for Christ or his Christians. But such a thing is not Justice, no matter what an entitled person believes. Because that person could have gone to someone else who would have been happy to serve them, but they believed they had the right to force another human being against their will.

And if you do not like my words, if you do no like what a God of Justice says, well. I leave you with the words of my Father-in-Law. 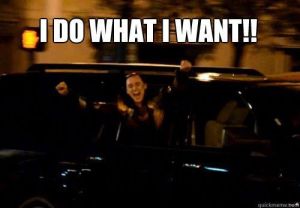