Really, this is a bit of a Post Script, going over some things that have occurred to me and to some comments that have been going along the way here.

One of the first is by juliaergane, who I thank very much for their comment.

Halstead is not an “eclectic pagan.” He is in fact an Atheist, which he readily admits. In Classical times, even the philosophers gave the Gods full honours even if they doubted their existence. He does not doubt. He claims that he knows beyond a shadow of a doubt. He does indeed Mock theists, he culturally appropriates where he should not tread — and, yes, I do take offense to him “using” the Hellenic pantheon for his own purposes. He is appropriating. I am worshipping. There IS a difference.

Halstead has refered to himself as an “eclectic” Pagan which is why I refereed to him as such. While he is indeed an Atheist Pagan (as ridiculous as that is) being an atheist pagan and an eclectic pagan are not mutually exclusive. Eclectic Paganism is about mixing different things together. It’s got it’s own issues, but simply because you might mix a native american dream catcher with runic wards is neither an atheist nor theistic exclusive practice. So when Halstead says he’s an eclectice pagan, I’m willing to just take it on face value. The same way I as a polytheist am an eclectic Pagan as well.

Now I will agree that from my historical studies, Juliaergane is correct that philosophers gave full honors when they discussed the Gods. They would also then go on to question absolutely everything. So, mixed bag.

For me though, the real thing here is that Halstead is culturally appropriating where he should not tread.

So here’s something I’ve noticed about “cultural appropriation” both in terms of Paganism, and in the larger world. Everyone can dress it up in terms of privilege, or power, racism, piety, blasphemy, or what have you, but when you strip everything away, it really comes down to two things.

I can already see everyone wanting to kill me and call me heretic and blasphemer, but hear me out.

Recently, there was a little white girl with blond hair who got dreadlocks. She thought they were cool, admired people who had them, and wanted them. What then happened was a deluge of hate and screams of cultural appropriation. That little girl shouldn’t wear dreads, those were for black people, how dare she ignore black people’s pain, their lived experiences, etc, etc, etc. Completely ignoring the fact that dreadlocks have been worn by many European cultures.

Recently, a number of cosplayers have been attacked for using makeup to darken their skin in order to look like darker skinned characters. Again, cries of racism and cultural appropriation. Ignoring the pain of being a “poc.” Despite the fact that a number of these “darker skinned” characters are from shows that have nothing to do with earth or its history.

So coming from those examples to this one about Halstead, well…here’s how everyone sounds.

My Gods, My Imagery, My Icons! And how dare you touch them, you mother fucking son of a bitch! I’m worshiping, he’s appropriating. I’m faithful, he’s a blasphemer. I show respect, he dares to joke! I speak for the Gods, he doesn’t even believe the exist!!!!!!!!!!

He gets paid to write for a rather famous blog hub, and the rest of do this shit for free. (Oh wait, was I not supposed to mention that?)

I also want to thank Renee M. Dooley for their comment as well, where they said:

Various ATR (LS:African recons I’m guessing) communities also deal with issues of appropriation, mostly from Neo-Pagans/Wiccans who are looking for something ‘exotical’ to spice up their ritual or who see the Orisha/ Lwa/ Nkisi as plug n play wish fulfilling genies. Completely disrespectful and,they seem unwilling to listen to WHY such an attitude is an issue.

I will completely agree that “neo-paganism” does have some “plug and play” issues. But is it purely for something “exotical” to spice up their ritual? Or is it sometimes that the Orisha/Lwa/Nkisi do speak to these people on some level and ask to be included? The biggest problem is that divine communication is private between God and Faithful, rarely with any physically written words. So what then is “appropriation” and what then is by the Gods’ own request?

I’ve gone through the comments section of all three posts and here’s what I’ve noticed. In Halstead’s there’s a discussion about why it seems people can’t have faith in the Gods to defend themselves from wrong actions. Frankly, I think this is a good point and I would love for Krasskova or Dawson to respond to why it is that they have to take this action when by all accounts the Gods we worship are not doing anything to Halstead or those like him? On Krasskova, the discussion seems to be split between “Halstead is not a real Pagan” and “self determination is detrimental to Paganism.” 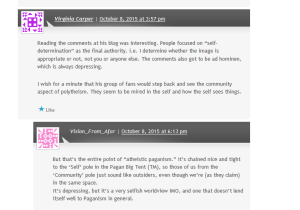 To which I can only really respond with “Fucking what mate?” If we are not allowed to self determine, then we have no right to ourselves, our individual identity. If others may determine for us, how then are we any better than the fundamentalist Muslims out there destroying historical artifacts because they are “blasphemy.” The answer is, we’re not. And self determination in no way invalidates external truths or anything like that. Now, does self determination allow people to be irreligious assholes? Sure, but when the fuck did Pagans suddenly become Cultural Authoritarians who wanted to determine how everyone thinks and acts?

Bloody Hela, I thought we all left Christianity because of that kind of shit.

Dawson doesn’t really have any comments on her blog, but the thrust of there seems to be “woe unto us, these sins happen because people do not worship the Gods.” Which…is fair. I guess.

Thankfully, mine seems to be not the only rational voice. Tom Swiss of Zen Pagan wrote his own article There Is No Such Thing as “Cultural Appropriation” Which thankfully at least starts out pointing out what appropriation actually is. (He is wrong about Jefferson raping his slaves though. Jefferson is only recorded with sleeping with one slave, actually having a relationship with her, and that was after his wife’s death) So ironically, when Halstead accused Krasskova and Dawson of cultural appropriation he was correct…for all the wrong reasons and definitions.

And the term becomes even more ironic when we consider its literal meaning. According to the Wiktionary, “to appropriate” means “[t]o take to oneself; to claim or use, especially as by an exclusive right” or “[t]o set apart for, or assign to, a particular person or use, especially in exclusion of all others; with to or for”. So if anything, it is those who are claiming that bits of culture are the exclusive right of a certain group who are practicing appropriation.

So maybe cultural appropriation has happened. I mean, the Gods belong to themselves, and their culture is the sum total of cultures in which they have appeared and influenced. They do not belong to us mortals, but they have given to all us mortals of themselves for us to use. Yet, it does seem that in the end Krasskova and Dawson have done the cultural appropriation more so than Halstead has.

For what Halstead has done is indeed blasphemy. But Krasskova and Dawson have proclaimed that the Gods and their Images are only for devoted, faithful Polytheists. They are the cultural appropriators, not Halstead. Hel, as much as I respect Krasskova’s work (I’ve never encountered Dawson) I an only imagine how pissed they will be at me, how they will question my faith, my piety, and claim that because I ended up (god help me) kinda siding with Halstead on this. Appropriation is the act of claiming something for a specific person or group, cultural appropriation then is the appropriation of cultural icons and practices for a group alone. People using Gods they “don’t believe in” or who come from outside their “heritage” are not appropriating these things, because they are not then declaring that the original people cannot have them. An example of cultural appropriation by definition would be if the Koreans started wearing kilts, and the told the Scotts that they could no longer wear kilts. But that has not happened here, at least, not by Halstead.

So there we have it. I have probably burned any good will I built up in parts 1 and 2, likely made my name to become mud, and probably will be regarded as the worst polytheist in existence. But I can only go by the set definitions of words. I can only judge an action by itself, not by who has committed it or what his past deeds have been. As much as I would like to, such a thing would be wrong. I respect Krasskova and Dawson, I am glad they gave voice to their views, but if cultural appropriation is wrong, as they have stated, then they cannot then claim that Pagan iconography can only belong to devoted polytheists and not to other pagans who “water it down.”

Because we all started in the kiddy pool, with “weak, watered down” paganism. We grew to were we are because of the grace of the Gods. As Paganism grows, and I do hope it does, that means we must be open with our believes, our rituals, our icons, so that people can learn and grow and Paganism can once again become a major set of religions and our Gods truly be respected and worshiped.

After all, what is a God? Is it something that belongs to someone? Can mortal own Gods? Direct where and when they go? Who they talk with? Where they appear? Is a God merely an idea? An idea that might be possessed, copyrighted, owned, labeled “Do not touch you infidels!”? Do mortals alone speak for the Gods, know what is best for the Gods, and how and when Gods should appear and be used?

Are the Gods slaves to mortals?

Or are the Gods discrete, individual beings with their own agency, thoughts, powers, and goals? Are the Gods going to have to pull a #notyourshield on us polytheists because we seem to think we alone deserve to hear them and be their voices in this world, and that if they appear anywhere else for whatever reason it is “appropriation and blasphemy”?

Let us not make this mistake, my fellow polytheists

Beckett said we should put the Gods first. He was right. But to me, putting the Gods first does not mean denying them to anyone or everyone else! It means putting their choices, their actions, their words, above and beyond our mortal ones. For we are the worshipers and they the worshiped…not the other way around.

5 thoughts on “Is Appropriation ever Appropriate? Part 5”