Now, believe it or not, there are many kinds of trolls on the internet. Some go around to be mean, some just to disagree, some to taunt, and some to debate and show the issues that lie within people’s “sacred” beliefs. For every Joker, there is, in fact, a Socrates.

I was a very Socratic troll, when you get right down to it. Oh sure, I could get mean, but I had a set code I went by and I tried to follow the rules of debate as best as I knew them. Most of the time, all I did was question people about their position and why they believed it, pointing out logical fallacies and various hypocrisies as I went along. And, in the end what started out as an attempt to learn about different people’s beliefs, got me labeled a troll. So, I just accepted the title.

After all, nearly every major philosopher in western civilization had basically been called a troll from the beginning. Hel, Martin Luther managed to troll the catholic church so hard he started Protestantism. And while I was no where near that league of individuals, I considered myself in good company as a man who questioned everything.

And when I “trolled” I had one victory condition. One point in time, when I knew that I had functionally won the debate, and it was time to “good job everyone, let’s pack up and go home.”

It was when the person I was debating started using ad hominems.

a) Julie is arguing for “trickle down economics,” but instead of pointing out why that might not work, James insists that Julie is a slut and therefore is not credible in this discussion.

b) When Mark tried to argue that a journalist sleeping with the developer of the game said journalist positively reviewed was a “conflict of interest,” the journalist responded by saying Mark was a misogynist who only protested because he hated women.

As a rule, ad hominems are usually only seen when a person has completely run out of ways to refute their opponent’s argument. When the facts are indisputable, and the logic irrefutable, there is only one option, discredit the person presenting the facts and logic.

c) When Edward Snowden leaked private government files showing the the US Government had been illegally spying on on both citizens and allies, they labeled him a traitor.

So I always considered that the point where I had won any debate I entered. When I was attacked personally for being whatever negative thing the other person thought I was at the time, I had reached the point where my argument was proven superior and correct. To this day, I believe I have never had to use an ad hominem. But part of that is because I will admit when I have lost an argument. That’s one of the rules I set for myself, that I could be wrong and that I should learn the truth, rather than hold any single thing as beyond question.

So when Halstead started going around on not only my blog, but several others saying things like this:

By all accounts I knew I had “won.” He couldn’t refute the arguments, he couldn’t refute the facts. All he could do is try to discredit my ability to say anything relating to these topics (or any topics, really) with things like “was a troll,” “is crazy,” “is a small, sad little man with sad little gods,”  and “believes in Thor has the power to change the climate.” Along with other, not so nice things.

“But Lucius!” I can hear someone say, “You have insulted Halstead and said mean things like he is an idiot and a fanatic, certainly those are ad hominems!”

Indeed, random person, I have insulted Halstead by calling him an idiot and a fanatic. But insults are not de facto ad hominems. I have never, and will never say, that Halstead’s arguments are wrong and should not be listened to because he is a fanatic or an idiot, or even because he is an Atheist hanging out saying he’s a Pagan (despite the massively confused looks by everyone who hears that). I say he is an idiot because his arguments are bad, riddled with false information, misrepresentation, and bigotry, and a fanatic because he refuses to admit defeat even when he has been proven factually and logically wrong.

It is a bit “chicken and egg” but the basic way to tell an insult from an ad hominem is this. Is the argument invalid because of who is making it (ad hominem) or is the person something for making that argument (insult).

d) Andrew is a homeless man who makes a reasonable, factual case for food stamps, but Harriet insists his argument cannot be listened to because Andrew is Homeless with a drinking problem.  (Ad Hominem).

e) Linda insists that babies can naturally swim in water because they lived in fluids during gestation. George says she’s an idiot for making that argument, as we can factually prove babies will drown in water. (Insult).

This is why back during the cultural appropriation articles, I showed, factually, Halstead had not “culturally appropriated.” Even though I dislike him as a person, believe him to be an idiot and a fanatic based on evidence presented by his own words, I can still separate man from argument and argument from man. That’s why I can, and do, respect Krasskova, Sarenth (sorry if I spelled that wrong), Rhyd, and, many others in the blog realms, even though I have often disagree with their arguments or positions.

Am I saying this to paint myself as some saintly individual? Fuck no. I am not a saint. There’s a reason I had that code I mentioned back in my troll days, and why I keep pretty tightly to a set code these days as a blog writer. Good men don’t need rules, but I have very many.

There’s a little thing I call “Lucius’s Law,” and it’s pretty commonly stated elsewhere. I’m not even the first to notice it as a pattern, but I named it that just for ease. It goes like this.

“The thing you most protest/hate in others, is the sin you are yourself most guilty of/desire to commit.”

I know, pretty basic. So brilliant it wraps right back around to stupid. But there it is. Frankly, the reason I keep it as tightly as I can to the argument (even if I do go off and insult) is because a lot of what I find despicable in what Halstead’s doing is somethings I really would like to do and get away with myself.

And sure, the law probably could be used to determine some things about Halstead, but I will leave that to others.

But to just believe whatever the hell I want, regardless of facts? Though Halstead likely scoffs at the idea of me being such a factual and rational individual, I do try. Still it would make life so much simpler and more joyful if I didn’t. I could ignore it when a position I don’t like has reasonable arguments and factual data. Fuck them, I believe this and I’m right because I would never believe anything wrong, because I’m a good person!

And to give into fanaticism, to crush the infidel, to run ramshackle over other people who didn’t believe as I did and drive them out, destroy them, or make them convert in fear to my point of view? Gods wouldn’t that be lovely. To by, word and steel, crush the infidel and destroy him. It’s a hunger I feel every time I hear about ISIS, or the WBBC, or the rape gangs in Europe. To raise high the war banner of Helheim, scream my Goddess’s name to the four winds, and let my black sword Corpse-Breath devour the souls of those who would harm the people I deem as “mine.” And by sheer force of will, divine power, and unbridled blood lust and rage, drag everyone behind me to do the same. 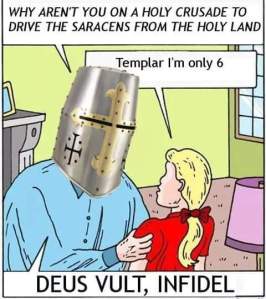 It is a hunger I feel with ever news cast, every internet post. It is the darkest parts of me, of Svartwulf. It’s part of why I make so many jokes about that kind of thing, because I’m laughing with it in an attempt to not give into it.

It is not, in my eyes, a bad thing to have these feelings. I have seen them much in many others, including Halstead, Krasskova, Dawson, and so many, many others. We all have them, but having them doesn’t mean we should unleash them. At least, not outside certain conditions.

For me, those conditions have not been met. So I hold back those dark feelings of fanaticism and instead embrace cold, hard logic and facts (even if I do believe in Gods who cannot be “scientifically proven”). To wage war on words, not on men. Because as much as I know it would please Hela to be given the souls of pedophilic rapists, Islamists, and even the odd Christian, she is just as pleased by the recognition that people also have inalienable rights to believe freely, speak freely, and so forth, and the honoring of those rights. This is the lightest parts of me, of Lucius.

Because all have the right to believe as they want, and all have the right to question the beliefs of others. In the heart and mind is the battlefield to which I keep, in which good ideas hopefully triumph over bad ones, and in which even these battles must be enacted with honor. For honor is pleasing to the Gods.

Which is why, even though I have “won” the whole thing with Halstead because he has been driven to ad hominems, and will no doubt use what I have just admitted for even more of them against me, I will not retreat from calling out his arguments. Because the man has lost, but his arguments remain, and it is the argument I wish to defeat, not the man. Even if, as many hope, Halstead is driven from his place of power and influence, if his argument remains viewed as valid, there will be other Halsteads who do as he has done.

It is the argument, that must be defeated, not the man. And so I will continue to fight the argument, as I have always done with arguments like these, because the man is not my target or even, really, my concern. Though Halstead has driven me to temper, and indeed has done his best to assassinate any credibility or respect I have earned from this blog, he has never been my target, nor have I sought his end. Certainly, by ancient custom of my ancestors I have more than enough right to seek any vengeance for his insults across almost every blog he has contacted that I desire. But I shall endeavor to continue being the “bigger man,” and not seek vengeance against his person. Small and sad though I may be, with my small and sad Gods.

Falsehoods, manipulations, and misrepresentations are things that must be exposed for this victory of good ideas over bad to happen. Not the silencing or discrediting of Halstead, though no doubt both might follow for dogmatically holding to the former. For what he has wrought with his ideals and words, intentionally or not, has stained all of Paganism with its fury, blood lust, and division. And this is a thing I would see ended, and not to return to plague our peoples.