Put on your duck boots and wear old clothes, we’re going into the septic tank that is Rhyd’s latest attempt to rub the doggie noses of society in to the shit he found on the carpet. We return to: The Violent & The Dead

There’s also an inherent violence to this last option, what Jacques Lacan and Slavoj Žižek point to as jouissance. Jouissance is supreme, excess enjoyment; enjoyment at the expense of all else; pleasure and joy that give no thought to anyone harmed in the process of amusement. Jouissance encompasses both the sadistic pleasure of the child who shoots small animals ‘for fun,’ and the sated and oblivious pleasure of a good meal at a restaurant cooked and served by underpaid and miserable workers. Jouissance is the very engine of denial, the machinery of Capitalist consumption.

Huh, so…the guy Rhyd is getting his “excrement theory” (i.e. everyone poops) from is a guy who believed that all pleasure, be it derived from harmlessly enjoying a meal to being derived from the psychopathic pleasure of shooting small animals, was equivalent. Why? Because you didn’t think of those poor workers while you ate, you capitalist fuck!

You know, I rather get the impresson Rhyd will not be happy until everyone’s walking around like those monks from Monte Python, slapping themselves in the face with boards shouting Mea Culpa

“HOW DARE YOU BE HAPPY! DON’T YOU KNOW THAT IN THIS WORLD SOMEONE, SOMEWHERE IS SUFFERING? HOW DARE YOU IGNORE THEIR PAIN FOR YOUR OWN PLEASURE! SHAME ON YOU! SHAME ON EVERYONE! YOU’RE ALL SHIT!!!!!!”

He is literally telling us we should never be happy because someone else is sad. And he’s characterizing said joy as a violent, vicious action equivalent to shooting small animals, because it excites you.

This might actually be part of the reason I’m so against G&R. They’re driven by a philosophy that says, basically, pleasure is evil because it ignores the sufferings of others. I on the other hand studied at the hands of Nietzsche, who put forth that pleasure and beauty were indeed the only good things in this world and that morality should flow from that which is pleasant and/or beautiful. Which probably helps explain why I believe in ancient Pagan theologies where as Rhyd and friends throw all their faith in the butchered teachings of Jesus Christ as composed by Marx while on a drinking binge.

That violent and oblivious enjoyment can be seen best in the wars that Western societies fight to secure their oil addictions. It should have been no surprise that a U.S. President would have chosen to hide the shipments of coffins containing dead soldiers from Iraq and Afghanistan in the last decade; nor should we really think it odd that so many deaths in the last few years have been through remote-controlled drones. As oil becomes more scarce, the inherent violence required to get more of it might be too unbearable, like the excess feces after eating an entire pizza or the creation of more homeless to make way for an Olympic Village or new stadiums.

Remember, Pleasure is Suffering. Joy is Misery. Happiness is Sadism. Freedom is Inequality. Property is Theft, and Marxism didn’t do nuffin’.

Only Capitalism has done these things. And you are evil for supporting capitalist systems. Because under Marxism, these things would never happen. People would not be dispossessed and homeless, you would never shit after eating a whole pizza, and we wouldn’t have to worry about Olympic Games because that is violent entertainment which might distract the masses from all the suffering they are not causing with their Marxist utopia.

That is, the consequences of our excess, the violent enjoyment, our jouissance, must be obscured and hidden in order for us to enjoy it.  Images of mutilated children in Iraq, stories of the conditions of workers in iPhone factories, tales of flooding cities all ruin the enjoyment of our addictions and jolt us back to the very reality of the human activity behind the experience in the same way as a human hair found in a restaurant meal or a bone found in a chicken sandwich.

You know, I have a video that pretty much covers Rhyd right now. Just switch Patriarchy for Capitalism and Marxism for Feminism and…it’s just perfect. Especially since Feminism largely comes these days from a Marxist background and uses Marxist language.

Next thing he’s going to tell me is that video games cause sexism, capitalism, and class warfare or something.

Homelessness is also a condition of violence, as is global warming, deforestation, pollution, and war. You cannot have private property without exclusion, any more than you can have industrialized production without global warming. And that ‘excess’ or that waste product is one of violence. Cutting down a forest to make room for a highway is a violent act. The ripping off of a mountaintop or the bombing a country to get at their resources is an assault. What is left behind, the ‘bone’ or ‘excrement,’ doesn’t go away anymore than the victim of a rape disappears after the act.

Hey Rhyd, I got a question…how was it when you had sex with Chris’s wife? I mean, since private property is “exclusionary” and you two are both so against it, I’m guessing that the idea of regarding another person as “exclusively yours” is also abhorrent, so I can only imagine that Chris has shared his wife with his friends to help fight against “exclusionary” systems. Now, I know you say you’re gay, but that would imply that you have an “Exclusionary” right to your own body and sexuality, and since the “exclusion” of private property is bad, then the “exclusion” of yourself would also be bad. And I can only imagine the way to fight that would be to have sex with someone even if you didn’t find them your type because you want to help destroy exclusionary systems. Like private property.

People having homes isn’t violence against the homeless. Having industry is not inherently violence against the planet. As for cutting down trees, bombing countries and leveling mountains, yes those are violent acts. But if Rhyd has such a problem with violent actions why is he arguing for the complete destruction of society, the seizure of all private property, and the mass redistribution of wealth from people who actually created it to people who didn’t!

He argues that “violence is evil” even as he argues for the use of “violence to recompense evil.”

And having exclusive rights to something does not equate violence or violent pleasure. Me having exclusive rights to my pc doesn’t mean anywhere, in any form, that Rhyd cannot have his own pc if he wants to. It just means that he can’t have my pc. Just like I can’t have his pc. But hey, if private property is so bad, let’s just get rid of it and Rhyd can hand over the money in his bank account because he makes more money than I do, we can see if Chris’s or Bone’s wives are attractive enough since they have a mortal wives and I do not, and let’s work on some redistribution of properties here. So Rhyd, hand over those credit cards, Chris & Bones, let’s see some pics. I mean, you are prophets speaking the Truth of Marx, I should think you might want to lead the way with this abolition of exclusivity.

But like the silencing of a rape victim, the censoring of war images, or the flushing of a toilet, there are ways in which we specifically try to ignore the necessary consequences of our actions or the Excremental Remainder of human activity. Seeing the mounds of trash we create destroys the illusion of consumption-without-consequence. Seeing the victims of our wars weakens support for military expansion. Making a connection between global warming and the car we drive to work would force us to confront the very violence of an activity we consider foundational to a ‘good life.’

And yet G&R have done none of these things themselves. At the time this article of his was published on Gods & Radicals, Rhyd was on a transatlantic “pilgrimage.” I’m under the distinct impression he took gasoline based transport from his home in Seattle to England and wherever else he is going. He did not travel in an eco-friendly manner such as by horse, or by walking, or by rowing or sailing. No, I am pretty sure that he road and he flew.

Yes, the man begging on patreon for $400 dollars to pay his rent is presently ensconced in the English nation, having used carbon fuels to get there, and all the while using his environmentally destructive computer to write about the evils of modern technology and industry and how we should all abandon them for the good of…Marx. The Good of Marx I guess. 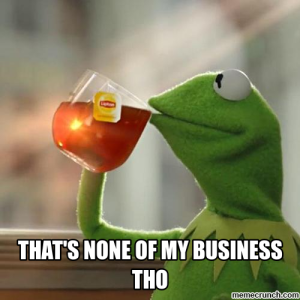 When we do acknowledge the violence, we create hierarchies to excuse some actions while vilifying others. We consider the razing of a forest for a highway or suburb less violent than the eco-activist who torches a bulldozer. Developers are awarded tax breaks and profit from their violence, while the ‘ecoterrorist’ goes to jail. The homeless squatter in a foreclosed house is beaten and jailed while the real estate agent is given a commission for selling that home. The plight of the victims of our daily violence are ignored when they try to speak of their villages flooded or their children bombed. At the same time, we throw parades for our military and line up for days to buy the next big i-thing.

Okay, we treat the destruction of a forest as less violent than an “ecoterrorist” blowing up a bulldozer because in the case of the former, it is a person doing with their property what they wish. If a man wishes to cut down a tree in his yard, that is his business. The same prinicple follows a company or a government who buy land and then cut down trees on it because they either need the wood or need the road. Much like a man might cut down trees to build his house. However, the terrorist is destroying something he does not own and has no right to destroy. Much like an arsonist coming to set fire to a man’s house simply because said homeowner felled a few trees.

One action is just, the other is unjust. I know this kind of “hierarchical” relationship is beyond you, Rhyd, but I’m not concerned by that, since you appear to be the kind of person who thinks other people are evil because they shit.

And it’s much the same with the homeless squatter vs the real estate agent. Said Agent is given power to sell the property of another. The squatter has no such permission. Now, is it fair that a homeless person may not use an empty house? Probably not. But would you like someone coming and living in your attick apartment while you’re off in England, Rhyd? Have you opened home and hearth to the homeless, to live in your domicile while you gallivant off to the Old Country on a spiritual retreat?

Forgive me if I doubt you have done so. And yet, having by all accounts probably not done so yourself, you would condemn others for doing the same actions you are doing yourself. The only difference is that you believe the lack of doing these actions is evil, where as they consider the lack of such actions moderately just. 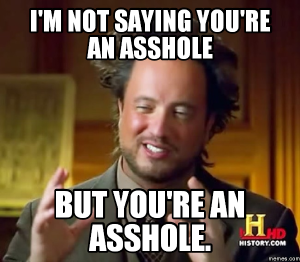 We celebrate and reward the violence at the very foundation of our civilization and then dole out more violence in pursuit of maintaining our cherished, modern, ‘way of life.’  And to do this, we ignore the Dead.

Oh, so now we’re going to talk about the Dead are we. Well, I hope you’re ready to fight on my own home turf, Rhydy boy.