Because Slavery is Equality, North Korea is Best Korea, and Rhyd can’t tell the truth to save his life, we’re wrapping up The Death of Liberal Democracy?

As I mentioned, though Capitalist exchange seems to be an ideal situation for the state to maintain itself, Capitalism never delivers the ideal. More so, people who cannot secure what they want through the economy are liable to do so outside of legal means or even revolt.

Really? How has it failed to deliver the ideal? I mean, I’ve studied capitalism and so far it actually seems to be living up to its ideals pretty well. And given that our Governments are successful, it’s hard to argue it isn’t working. Admittedly, there’s a lot of national debt, but that isn’t the fault of Capitalism, it’s the fault of Politicians who can’t keep a damn budget.

But we’re still doing a shit ton better than any Marxist country out there, and our people live longer, better lives. Including our poor.

Still, I’m sure Rhyd, who has never lived in a communist country (Because he would never have left such a utopia had he been to one) is wealthy with more false claims and whiny entitlements.

Thus, Liberal Democracies have adopted certain Socialist programs in order to lessen the damage that Capitalism causes. Universal health care, funding for the un-employed, food and transportation aid, minimum wage guarantees and other such programs act as bandages on the places where Capitalism causes more damage than good. And while Liberal/Progressive/Social Justice movements in many Liberal Democracies see such programs as signs of increasing fairness and justice, these programs actually function to pacify resistance to Capitalism and the State, particularly since they are funded by revenue derived from Capitalist activity.

You’re right Rhyd, we should just get rid of all those programs. And then we can see if you have your Glorious Revolution. Because the thing standing in the way of socialism is…apparently socialism.

Of course, we didn’t use to need these programs. Used to be, you could actually afford to see a doctor out of pocket. And if you were unemployed there used to be extensive family networks people could fall back on. And before there were minimum wage laws, products were a lot cheaper. You used to be able to get a candybar for like ten cents. Now it costs almost two dollars.

So Ironically, even as these “socialist programs” helped people, they also hurt them. With universal healthcare, the cost of care has gone up to the point you have to get healthcare insurance. We’ve subsidized people in so many ways that families are broken up and scattered all over the country, unable to help each other and in many cases not eve knowing each other. And we keep having to raise the minimum wage because the price of goods keeps going up because the laws of supply and demand mean that our money is worth less.

From a different point of view, all these “Band aids which hide the harms of capitalism” are…in fact causing a lot of the problems Rhyd attributes to Capitalism.

In fact, such a contradiction is a great benefit to the continuation of Liberal Democracy.  People who might otherwise be very critical of Capitalism and the existence of the State find themselves in a position where they rely on the continuance of both for their existence. People suffering from illnesses for which medication subsidized by the government (and paid for by Capitalist-derived taxes) is the only way to survive thus need Liberal Democracy to continue.

I’m just going to pause and let everyone reflect on the fact that Rhyd, who apparently wants us all to live in a totalitarian state which owns and distributes all property according to its whims and uses its population as slave labor to produce its goods and finances…is actually having a problem with people relying on their government that is providing them with goods and services in exchange for taxes.

This is where the Brexit vote becomes primarily interesting. Many leftists in the United Kingdom are quite terrified of the likely reductions in benefits and social programs for vulnerable people after the exit from the European Union. They have great reason to worry, too, as the European Union did significantly help increase funding for social programs and force the UK government to adopt more open policies on immigration, gay rights, and other protections for minorities.  The European Union represented the height of Liberal Democracy, and the U.K.’ exit from it signifies not only an early symptom of the death of Liberal Democracy, but a significant short-term (and possibly long-term) increase in suffering for those who relied on its promises.

So Rhyd, who complained about these “band aids” existing is now complaining about…these band aids possibly no longer existing. Despite the fact that the remove of these “band aids” might actually have people “see the problems with capitalism” which would further his Marxist goals.

But once again, I will point out that the EU is absolutely not a liberal democracy. At all. It’s apparently started calling for the dissolution of the national governments of member states and for them to transfer their armed forces to EU control. EU control which is held by a body of unelected oligarchs.

You know, I’m going to laugh when in the next couple of years the UK is doing wonderful and the EU is turning into another tin pot dictatorship.

But it also means a blow to Capitalists, as well, who now face new barriers to trade and cheap labor through immigration. Also, the Liberal Democratic policies of the European Union significantly stabilized markets, making it so that Capitalists could plan profits long-term. The drop in the Euro and the Pound, as well as respective stock markets, is a symbol of the panic felt by Capitalists who fear loss of profit.

And even as I write these words I hear the Pound is recovering  and headed to be stronger than ever. America, Germany, and many other nations are eagerly racing over to the UK to negotiate new trade deals with much, much better terms than any that were allowed under the EU. And sure, the cheap labor of immigration might disappear or at least slow down, but that will mean more Brits get better paying jobs as the competition clears out…which will mean an improved quality of life for them in the long run.

And, free of the totalitarian regulations and over taxation of the EU, I suspect the capitalists will soon be making more profits, hiring more workers, and bringing more money into what was already one of the strongest of European economies.

It’s amazing what happens when you don’t have despots redistributing the wealth.

To see the other side of the European Union one only need to look at the situation in France. The Loi Travail in France was crafted as a way to liberalise (that is, open up) the labor markets in France, giving employers more flexibility in hiring by taking away worker guarantees. French workers still have some of the strongest protections and benefits in Europe, and empowered workers mean less profit for Capitalists. Thus, Liberal Democracy, particularly through the open-market policies of the European Union, needed to reduce worker rights in order to ensure Capitalists invest enough money to start the economic cycle which generates taxes.

“The problem with Freedom is people have the choice of not participating in our desired activities.”

Yep, the EU has set up a worker’s paradise in France and now all the workers are about to have no jobs or no paradise because you can have your cake or eat it. And since they wanted to have their cake, the cannot eat it any longer because they’ve made it so hard for businesses to work with them that those businesses are going to places more willing to negotiate terms rather than dictate them.

I do wonder how many of those businesses will settle in the UK. I suspect a number of them. Hail Britannia.

More so, French workers enjoying more protections than many other workers in Europe destabilizes the labor market, encourages Capital to look for cheaper workers elsewhere, and gives basis to workers in other countries to demand more. The manifestations and strikes in France, then, are not just an attack on employers but on the State and Capital itself, as well as the Liberal Democratic foundation of the European Union.

Just so we’re clear here, what Rhyd is arguing for is basically forcing employers to keep jobs in their native countries by making punitive actions legal, viable, and available should people trying to make a living offer those jobs to people willing to work for less than a bunch of entitled assholes.

I.e. Protectionism. Which is actually one of the proposed actions Trump is saying he’ll take in order to force American Businesses back to our nation so that they have to employ our people rather than giving our money to places like China and India. 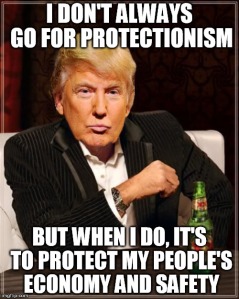 Why Rhyd, are you arguing for the fascist policies of Trump now? My my. I suppose I’ll have to get you some Alt-Right membership cards and a “make america great again” hat.

The situation in Oaxaca has nothing to do with the European Union, but operates on the same logic.  Mexico is a Liberal Democracy that faces financial ruin on account of a Liberal Democratic trade agreement (the North American Free Trade Agreement, or NAFTA). In order to generate more tax revenue, as well as stave off the governance problems associated with widespread poverty, the government borrowed money from international financial organisations in return for ‘liberalizing’ their markets and creating new ones, including in education:

The reasons why the Mexican government wants to impose the Educational Reform, even if it means killing people, as with the massacre in Nochixtlán by repressive state forces on June 19, are rooted in economic objectives guided by international financial organizations. The reform, proposed by the Organisation for Economic Co-operation and Development (OECD), with the OECD-Mexico Agreement to Improve the Quality of Education in Schools of Mexico, aims to lay the groundwork to shift education from being a State responsibility to instead being resolved in the realm of the financial market.

In order to comply with these objectives, the Mexican government passed educational reforms which took away rights from teachers. In Oaxaca, one of the strongest bastions of Leftist organisation, the teachers went on strike, and the state responded with violence.

Sooo, they wanna privatize the public schools in the hopes of improving education and the teachers decided to “strike.”

While both Capitalists and the poorest will initially suffer from crises of Liberal Democracy, as in Brexit, Capitalists are usually able to recover from such crises.  In fact, it’s precisely in such crises that Capitalists are able to influence their own governments more, convincing them to lessen worker protections (including wages) as in France, or selling off specific resources as in Oaxaca.

And if the people resist, Liberal Democracy has a particular weapon that proves generally irresistible: violence, upon which it holds a monopoly.

Next: Liberal Democracy and Violence

So an authoritarian who approves of dictatorships is going to try and lecture us on Liberal Democracies and their use of violence. Fair warning Raging Rhyd, you might wanna just stop now because:

1 thought on “So You Wanna Talk About Death Part 5”