So in my last couple posts, I’ve called out G&R for supporting the Black Rock Sioux despite the fact that the Sioux have a “blood purity law” about who can join their tribe (an action G&R has called racist when Heathens even ponder having it as a rule). And dealing with comments by people who took issue with the fact I was taking issue, saying I was over simplifying the issue and a host of other ‘justifications’ for why the SRS have a blood purity requirement and that’s okay, but not okay when Heathens have it (if they wanted to).

Today I’m just going to write a small bit here to wrap things up for now.

Blood purity laws are Discriminatory. They are an act of Discrimination.

More over, they are an act of Discrimination based on Ethnicity/Race. One must meet certain requirements of blood/ethnicity in order to enter such places that have Blood Purity laws/rules. This is a pure, baseline, fact. It is not negotiable in its nature.

Most of Western civilization has decided that Discrimination based on Ethnicity/Race is Racism. 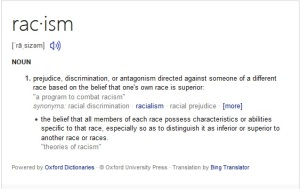 Gods & Radicals have sworn that they are against Racism. Hence, why they join with others to denounce any Heathen group who even appears to support discriminatory practices based on race…and even the entire religious umbrella of Heathenism as a whole at times.

Now, I will admit that most Folkish groups (much like the Black Rock Sioux enforces) do express a preference for their own “ethnic” group. They hold that this is not racist. They argue this under the logic of Abusus non tollit usum, which is Latin for “abuse does not take away use.”

Abusus non tollit usum essentially means that just because things like hammers, screwdrivers, cars, computers, or any other item out there can be abused to do harm to others, does not mean that we forbid (or should forbid) their use in society. This is applied to discrimination in the context that “just because discrimination can be abused (racism), does not mean we forbid all forms of discrimination that people might engage in both when it comes to ethnic and non-ethnic issues: relationships, friendships, dietary habits, etc, etc, etc.

This is a valid point of logic. For example we do not say that a gay man who refuses to sleep with women is being a sexist (well…generally we don’t). Or that a woman who only has sex with Hispanic men is a racist. Or that someone who refuses to eat Lutefisk is a ethnodietary bigot.

The other balance to most folkish groups is that they are not “Racist” in their application of “ethnic discrimination.” They recognize and believe that all ethnic peoples have the right to congregate with people of their choosing and control the make up of their ethnicity via “ethnic discrimination” without this being the abuse that is “racism.”

That is their position.

And that’s fine. For them. They are in keeping with their stated ideology.

Which is something that no one defending G&R in my comments has addressed. Instead I got a lot of justifications for why it was okay for the Standing Rock Sioux to engage in ethnic discrimination while heathens should not be allowed to do so. In fact, I suspect that no one has tried to defend this double standard of hypocritical behavior because they recognize on some level that G&R is betraying what they claim to stand for. Because it doesn’t matter how you justify it, an action is still that action.

Why do I think this?

Because it’s damn convenient that Krasskova gets blasted as a Racist by HUAR (again) after sharing my post pointing out there was no defense for G&R to be supporting this ethnic discriminatory practice by the very logic and stances of G&R after someone tried to defend them.

Gods & Radicals is an Anarchist Marxist collective who do not recognize the validity of the Capitalists State and often speak to the need to overthrow it. So the fact that the Standing Rock Sioux’s blood purity laws is legally recognized and enforced by the State should have absolutely no bearing upon G&R’s position. In fact, the fact the law is recognized and enforced by the State should be an absolute mark against the blood purity law in the eyes of Gods & Radicals.

Not only that, the recognition of the US government (a government G&R does not recognize as valid, but rather as an oppressive state to be removed) of the Black Rock Sioux tribe is immaterial and invalid to the discussion because said recognition by the Government means nothing to the anarchists of G&R. The Standing Rock Sioux are merely a tribe of people, period. Not legal special positions or legally special rights, merely a group of people. A group of people with a blood purity law. The kind of law which Gods & Radicals, along with their allies, have deemed absolutely racist and evil.

G&R have taken the position that “Ethnic preference” of any kind is Racist when it comes to groups of people like the AFA who are a heathen tribe. They have been very explicit in this fact, and partner with groups even more explicit about that fact.

So for them to join with a Tribe of People who Possess a Blood Purity Law (which they deem racist) and to Support Those People Unequivocally without saying a single word about the SRS needing to do away with its racist blood purity law to retain the support of G&R, means that G&R is perfectly fine with blood purity laws so long as they like the “ethnicity” of people who have it. Which is a double standard based on Ethicity/Race and therefor is itself a racist action. – It’s Legally Demanded, 2016

Now, last time I checked (while I was writing this) G&R has not posted anything on their website about their actions, justifying or excusing them. They have not made any calls (that I know of) for the Standing Rock Sioux to remove their blood purity law, or offer to help them remove it if it is indeed enforced upon them by the state. In fact, the only reaction to my posts appear to be…labeling Krasskova a racist after she shared one of them, by their good buddy HUAR.

Now, I am a small time blog, I don’t get a lot of hits, but it’s not like my voice is unheard of or unknown (though I will cop to being more infamous than famous). Rhyd Wildermuth himself used to read my blog. After my great debates with Halstead, I do get the impression I’ve been heard of in passing by many throughout the Pagan web. And I know the folks at G&R have heard of me after I’ve denounced their calls for ideological jihad and terrorism in public. But I do know that Krasskova is a fairly famous person who a lot of people follow, and her Share probably got my small voice heard by a lot more people…at which point who knows how many saw what I was pointing out: They Hypocrisy of G&R when it comes to racial practices and their violation of their own stated ideology.

And their only response I’ve seen is calling her names and defaming her character? Attempting to silence her voice and any voice she might share that dares speak out against them?

To me, that is more telling than anything.

1 thought on “Porpoises and Giraffes”