You know what’s fun? Insisting that people be disenfranchised, their voices silenced, and their rights be violated. Why? Because you’re a butt hurt little crybaby who didn’t get their way. Much like Lunapo in her post Now what? Here’s what

I stamped my feet, I cried, I had my temper tantrum. I shared my vulnerability on social media in the morning and my feelings were validated as they were treated as inferior because my feelings belong to the feminine experience. And we are officially the lesser. It was declared two days ago. 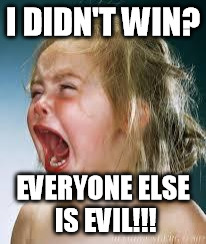 Yeah, forgive me if I don’t buy into one’s dismissal on the basis of gender and put it more on the fact that they threw a temper tantrum because they got out voted in a democratic election. Lunapo, I hate to break it to you but you were not dismissed because you’re a women, and women are lesser creatures. You were dismissed because you are an entitled child who thinks that they were owed a victory, that the world should have bowed to your wishes and your wishes alone, and that the fact you lost is a valid reason to lose all emotional control and scream like a spoiled brat who mommy won’t give candy.

I’m going to guess this is a new experience for you.

This is the post I drafted yesterday over lunch:

I am in a good place, given all that has happened in the last 24 hours.

I am white, cisgendered, straight.

But I am a non-Christian woman.

Ladies and Gentlemen, it’s time to play Check! Your! Privilege! 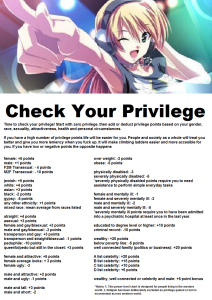 As Hubby says, the Republicans can’t get out of their own way in relation to the traditional folks, the evangelicals, and the TEA party. I held onto the hope from all of the sources and all of the polls and all of the in the knows that this could never possibly happen. But it did. I was scared last night, I’m terrified now. I’m keeping my finger in the pulse and I am ready to leave everything behind for the safety of my daughter. I cried this morning at the thought of having to raise her in this environment, at the thought of her elected leader thinking nothing of women. I am ready to run and seek refuge elsewhere as needed. But for the immediate moment, I stand in peaceful protest against the hate that has lead us here.

In the Grim Dark Future of Trump, there is only Making America Great Again. 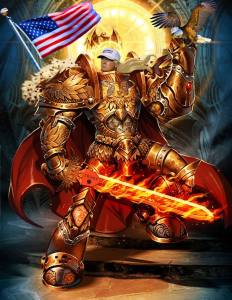 How does it feel to view your foes as so inferior that there was no way they could ever challenge you…only to find yourself not only challenged, but defeated?

Frankly, i think Lunapo really is this terrified, but frankly I can not find sympathy in my heart for her plight. Not because she is a woman, but because, for the first time, I think she is facing the exact same world that her ideological foes have been living in for a decade. That terror, that just around the corner was the thing that was going to destroy their lives, their families.

It’s the terror I’ve felt every time the Dianics were ravaged for their politically incorrect beliefs. It’s the same rage I’ve felt time and again as Heathen after Heathen was denounced and humiliated as a “racist.” It’s the same horror as bakers and photographers were either enslaved for their labor…or had their businesses razed. It’s the same gnawing anxiety of wondering every day of if I was going to get called into my job’s office and told I was fired because someone didn’t like what I said on my blog.

So, you know, now that you know our pain, maybe the Healing can begin?

Here is some bit of truth that has been circulating.

It’s about overt racism and hostility toward minorities.
It’s about religion being weaponized.
It’s about crassness and vulgarity and disregard for women.
It’s about a barricaded, militarized, bully nation.
It’s about an unapologetic, open-faced ugliness.

Actually, it has always been about the politics, the greed, the elites who felt they were above the laws, above the people, above everything. It is about the ideas of Individualism vs Identity Politics, about the Rights of Everyone to be Respect, not just those of the “minorities and down trodden.” It was about her crimes vs his “thoughtcrimes,” it was about her dishonesty.

It wasn’t about Red and Blue, that’s is true, because a lot of blue went red this time.

Was it about overt racism? Sure, the overt racism of the Progressives towards anyone who they considered the untermensch, the white, the straight, the cis, the male, the gender traitor women, the race traitor minorities who wouldn’t toe the line. the list goes on. It was about the unapologetic, open-faced ugliness of telling an entire group of people that they were everything wrong and evil with the very country their people had founded. It was about a barricaded, militarized, bully nation who has gone around stripping people of their rights, enslaving them, and them grinding them under a jackboot of “Progressivism” when they dared to complain about how they were treated.

Last night, I called on my inner shield maiden, and I stood in my kitchen and declared to Hubby that it is not OK. I told him voting is obviously not enough.

So, it’s treason then?

There was a lawful election, and Trump won it. Lawfully.

So you’ll forgive me if this sounds like you’re going to strap on a sword and join the pathetic dozens I see calling for an assassination, or a coup, or violence in the streets to scream and fight and terrorize because you didn’t get your way.

You claim you stand for the betterment of others, but all you’re doing is declaring that your tyranny is legitimate. That you have the Right to tell your fellow countrymen and women that you can dictate to them who shall rule them, by what means they must live. That you have the right to ignore their voices, their choices, their beliefs, and enslave them to your Will and Whim. 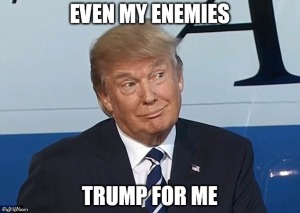 And you wonder why Trump won? Why so many went out there, switched sides, and got the man promising to stop you and yours from doing exactly what you’re insisting you should are going to do elected?

I need to do something about it. I need to stand my ground and I need to pitch in and do my part. I don’t have a plan yet. I’m not there yet. I still have two-ish months to enjoy my president, the first president whom I voted for who became president. The first president who spoke to me about the needs I see in the community around me. I will relish in these last two months. I will do more next time, because just voting was not enough.

Tell me, Lunapo, if Hillary had won, and it was Trump people saying the exact same things you’re saying now…how would you react? Would you support them, or would you insist they were hateful, despicable people who needed to just shut up and accept the fact that they lost?

Would you mock them as traitors and bigots, would you insist that their calls for “insurrection” be put down? That when they said “voting wasn’t enough, we need to do more” you wouldn’t insist this was an evil, even criminal, act of hate?

I think you would. I think you would be celebrating your victory and planning out what you could to crush your foes so they would never show their “hateful, bigoted faces in this country ever again.”

But you know what? Go ahead. Turn traitor. Raise up your swords and guns. Do more. Put your money where your entitled, privileged mouth is and step up. I mean, people like you were talking that good shit just a few days go, about how you were going to stand up to all the hate and bigotry and end it, put it down forever.

Go ahead, summon up your mobs, bring forth your righteous fury! Beat us! Fight us! Give Us A HUG!!!!

If you cannot accept Democracy, then come, try and enforce your Tyranny. That’s you’re only option now. Armed suppression. You lost the vote. You were rejected, you screaming child. So either nut up, or shut up. Because your political power is broken, and the only power you can possibly reach for now is power of arms.

But you’ll forgive me if I do not fear the blade of a temper tantrum throwing child who doesn’t respect the rights of others. 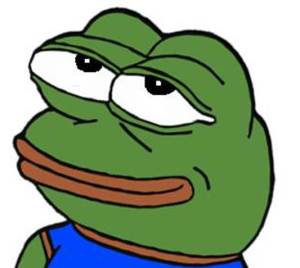