Ladies and Gentlemen, we have reached a post I never thought I’d have to ever write. And much like the distant post of Nazi memes I never thought I’d write, this one is up there. I swear to Gods, I have not been hanging around /pol/, but folks, it seems /pol/ has come to us. So please, forgive me for what I am about to do.

It all started on the GoodBook. As most things these days seem to. Well, when they’re not starting on the Twitters. Of course, this started before this particular post appeared in my feed, and I am amazed at the idiocy of those wishing to pull this off, but yeah. I am, of course, speaking of people trying to get the Electoral College to “Revolt” come whenever it is that they’re supposed to vote, and instead of casting their votes for Trump, as was chosen by the people and our electoral system, they…go rogue and vote for someone else. Probably Clinton. 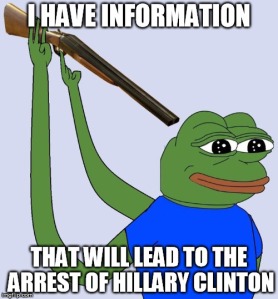 This, of course, would be a massive, unheard of, game changing break with tradition and history. It would also mark the end of the American Democracy, because presently the EC answers and obeys the voters’ will. Should they break with this tradition, they would instead be acting under their own will, and we would move instantly from a Democracy to an Oligarchy. But never the less, I am presented with this:

That’s right. Let’s just disenfranchise millions of people, destroy our traditions, upend our democratic republic, and institute a world where only a select, privileged few, have the right and the ability to determine who leads our country. Why? Because “fuck them, I didn’t win, and that’s not fair.”

Of course, you might be wondering what this has to do with Another Shoa. Well, that comes in here in a second.

That’s right, because some crazy dude on the internet claims “there’s a psychic connection between Trump and the Alt-Right!” that means, of course, that Trump is an anti-semite who wants to kill all the jews. Apparently he’ll just ship the Mexicans back and build a wall once they’re gone, but for the Jews?!?!?!?!?! 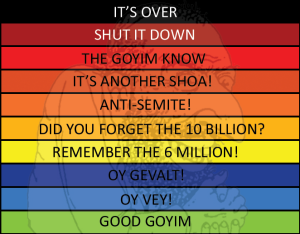 Think I’m joking? This is the conversation that made me break down and write this: 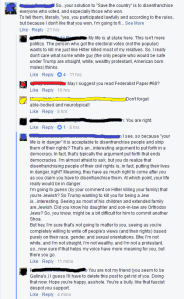 Yeah, Trump, whose extended family and own Children are Jews…is gonna enact the next Shoa! And the only way to prevent the SHOA! is to go and disenfranchise all the Goyim who voted for Trump and prevent Trump from being the President as was democratically chosen via the laws of our nation!

Ladies and gentlemen, I fear we are no longer “Good Goys.”

I say this because apparently as a “white guy” my opinion on this matter is invalid. Look at me, just being a bad goy. 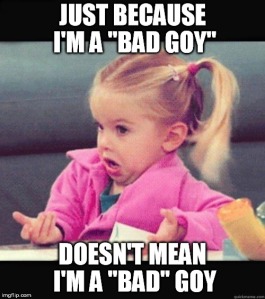 In fact, apparently for the thoughtcrimes of pointing out that “hey, doing this is going to be doing to others the very things you fear about to be done to you,” puts me in the “you’re a bully and I don’t have to listen to you” camp. Of course, that got said after I pointed out i was not a “white, straight, rich, protestant man,” so, you know. When you dodge the game of identity politics and racist dismissals, all there really is to fall back on is “you’re a bully.”

Because when I think bullies, I always picture the Goy telling people that the other Goy people are claiming is going to commit another Shoa is practically a Jew himself.

Look, I’ve got a bit of a unique perspective here. On the one hand, I spent pretty much eight years of my life living as an orthodox Jew and nearly converted. So it’s not like I’m ignorant or unsympathetic to the plight of the Jewish people. On the other hand I have spent almost fourteen years as a Heathen, watching and living under the onus of Racism and Nazism, where my religion and its symbols are publicly listed as “hate symbols” and their public showing as “hate crimes.”

I know what the Swastika means to Jews, and I know what it’s like to live in a world where the Jews tell me I may not possess, show, or share one of the holiest symbols of my ancestors. Where I may not discuss ancient beliefs, practice holy rites, of study in search of lost knowledge about my ancestors and their ways because it is offensive to Jewish People. Hel, it took decades just to get Mjolnir back to the point where we can wear it in public and have it officially recognized, and it still gets listed as a “hate symbol” sometimes.

I understand why the Jews fear another Shoa…but I also live in a world where I and millions of others are denied countless things that we have a right to possess…and may now even lose our democratic rights, because of a tyranny that is “justified” by that fear.

Because there’s one simple, fundamental fact that the people on that facebook post, and elsewhere who are arguing for the electors to switch their votes don’t seem to understand. Probably because they’ve lived in it for so long they don’t realize there’s any other way…or what it was like before. But I’ll try to explain it.

Democracy is nothing more than an unarmed, and usually non-violent, war.

Every couple years, people go out and they raise up armies. Through promises, through passion, however you like. And they lead these armies to the field of battle in the hopes that they will win the war, and get to rule and make their dreams come true. In our modern politics, the battlefield is the voting booth. And we’ve agreed to this “non-violent” form of war because it helps preserve our society. Not unlike the Eminiarians from the Star Trek episode A Taste of Armageddon.

But this “non-violent” war only works so long as we fight with our “computers.” So long as we respect the treaty between our various peoples. That everyone can show up if they want, they can vote for they want, and at the end of the day we accept the results of the war and we all go home and try to live in the following peace as best we can.

Few people seem to remember that the first time Obama was elected, McCain actually won the popular vote. But at the end of the day, despite their fears and anger, the Republicans accepted the results of the election and abided by the rules.

Now, this is something that the Left doesn’t like to talk about, or even consider, but the “Right” has spent the last several decades watching their way of life be eroded, attacked, vilified, demonized, and legislated out of existence. Where once a shopkeeper could work his beliefs, he now is made slave to those who insist he violates his morality. Where once their views on sex and gender was the norm, or at least accepted, they are now forced to watch as each sacred belief is demonized and exorcised from existence.

They have watched as their jobs vanished, their culture erased, their families destroyed, and constantly told that all these things happening to them were good and acceptable because they were evil because of their race, gender, sexuality, or creed. And after decades…they’ve had enough.

And now you have the very people who have been demonizing them for decades insist that, here, at the 11th hour…this victory be stripped of them, that their rights not only be violated, but erased from existence. People who insist that the computer be “blown up” so to speak.

Well then, the only option is War. Real, physical, violent war. The kind of war that burns cities to the ground. The kind of war that would ultimately lead to another Shoa as one side or the other purged the degenerates from their society. And honestly, I don’t like the “left’s” chances. Sure, they might have won the “popular vote” but they did so by such a tiny margin (3 million people, some of whom were dead, illegal voters, or felons) that both sides would essentially be evenly matched in terms of army size. But the Right has long been in possession of the superior firepower. And I’m sorry, but while the anti-facists might be skilled in placards and jackboots, those don’t hold up so well against rifles and regimented troop formations.

On the one hand, I understand the fear of the Shoa and long for a safe and peaceful existence. On the other though…I’ve long been made a second class citizen because of my religion and people, and my blades wouldn’t mind tasting the blood of those who insist they have the right to call themselves my masters regardless of their race, orientation, etc.

I am, ironically enough reminded of a Christian quote when I see all these people insisting the Electoral College revolt. “Forgive them father, for they know not what they do.”

But while they might not know what they do, Ignorance is no excuse under the Law, and what punishments they receive for their actions are completely justified.

Even if, Gods Forbid, it ends up being “Another Shoa.”