So apparently, and hopefully Jo will forgive me for talking about this (but he did make a post), Jo from Upsal’s Garden was asked to resign from the AFA and the AFA’s clergy. This is…something of a surprise to me, because I figured Jo was fairly up there in their tribe and is/was one of their most prominent proponents/public relations guys. At least, he’s the one I know. The AFA seems to be fairly insular (not that I blame them), so it seems a bit odd to me that they would ask one of their most renown to step down, much less actually full on leave.

This seems, however, to do with the new head of the AFA, Matt Flavel and another leader by the name of Alan Turnage, asking Jo to step out due to one of Joe’s kids (or his only kid?) being transgender. I’ve never heard of Turnage, but we’re all mostly familure with Flavel thanks to one of the first things Flavel did when he took the proverbial throne being to make a statement about how the AFA liked people to be their ethnicity (white) and their people to be…cis-normative I suppose is the right word.

And we all remember the giant shitstorm that started (for some reason) as everyone accused the AFA of once again being Racist and Sexist. Also, for some odd reason the AFA was accused of supporting 1950’s traditional Christian Gender Roles which..I’m still trying to figure out. But I did stand up for the AFA’s right to define and set their tribal culture as they wished. I stand by that still. There was the impression that what happened in one’s own house was still one’s own business though.

Well…apparently not anymore. At least, not for Leaders within the AFA. Since, according to Jo’s post: “…it might be “bad optics” for the AFA to have a member of the leadership with such a family issue.”

I will admit, I am…disappointed in this. To my knowledge, this was not ever a problem under McNallen. In fact, I would bet it was not a problem specifically because Jo rose high in their tribe while having a transgender child. I mean, if Jo’s child had murdered or raped someone…I could see this being a problem for certain. If Jo’s child had done something so dishonorable that it not only stained their honor, but Jo’s honor as well, and could dishonor the AFA, I could understand perfectly.

But for merely being transgender? This seems…odd. Certainly, our ancestors were not the most Trans friendly in their own ways, but while one might be publicly shamed for not living up to the traditions of one’s gender, I always figured there was still a place so long as you either a) put up with the shit or b) killed enough people that you got respected regardless. That they apparently described it as as family issue rather than a matter of honor, this too I find…troubling. I might have been able to understand it if it was framed in a matter of Jo’s child was “dishonoring” by not living up to what was expected of a cis-gendered Heathen. Not ideal, but at least understandable in the context of our heritage and culture.

And while I’m sure Jo would not have appreciated his child being used as a political shield, I certainly could see more tactical value in keeping Jo and his transgender child as part of the AFA. After all, with them included, the AFA could meet cries of “trans-phobia” by pointing out that “no, one of our top clergy and most public faces has a transgender child. We are cis-normative, but we are not inherently anti-trans.”

So it does seem something of a tactical error was made, getting rid of one of your top men who is fairly well respected outside of the tribe as well, and engaging in an act that can really only be read as “trans-exclusionary.”

At least to me.

Now here’s where I qualify that statement with a counter argument. While I do think it is a tactical error in the larger game, I can understand where the AFA might be coming from. This is mostly conjecture, but here goes.

The Transcommunity at large is…pretty close to being an enemy to everyone.

I know I am going to get some rage from this, but it’s true. Anyone who has been in the Pagan community for a while remembers the complete intellectual Genocide of the Dianics at the hands of the Transgender community. Looking out at the wide culture, transgender people wage what can only be discribed as “Total War” against, well, everything. From public figures to bathrooms, it is is constant violence without mercy, and the violence only ends after the trans-community has won a complete victory. While I understand this is undertaken from a “we only want our rights” position, there is no compromise, there is no qualification, there is only total victory or total war.

To the point where this is an argument going around that “biological sex is a social construct.”

“Some women have penises, some men have vaginas. If you’re not attracted to a woman with a beard and dick bigger than yours, you’re a transphobic bigot.” 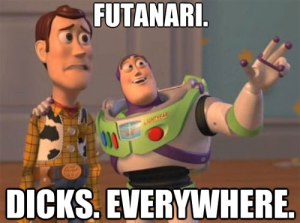 because I don’t feel right if I don’t have at least one meme.
Do not look it up.

I wish to Hel I was joking about that.

Don’t get me wrong, I could totally get it to work for me if I was as dishonorable as I am amoral. Just go to a lesbian bar, say I’m a trans-gender lesbian, and then browbeat some girl into sleeping with me or else she’s a bigot. But, by the grace of the Gods I do actually try to be somewhat honorable in my life. So I don’t do that.

But yeah, publicly the trans-community is pretty damn toxic, if not outright cancerous. Privately…I’ve worked with about four or five transgender people and personally…I have not had good experiences. The best I can say is one that was a literally barbie doll (hot as fuck, trust me) who was a grade A+ queen bitch. But too be fair…even if she was cis she’d have been that way so I really tend not to count that. As for the others, one got me in trouble with my job, twice. One of the times when they weren’t even working there, but got all upset when I point out we tolerate the offences of others because we offend others. The third kept threatening to beat me up. I have no idea why, I never did anything to them. It seemed to just be some sort of “I think macho men go around threatening to beat people up, so that’s what I’m going to do to prove I’m a MAN!”

Repeated attempts to convince them it was a bad idea to beat up the chronically sick demon because I would literally kill them to save my life was ineffective. The fact they worked both places I was working at the time, threatened to beat me up at both jobs, and the management refused to do anything despite being repeatedly told I was being threatened…did not endear me to a group which apparently can get away with the shit I would be fired for.

The fourth I can’t say I worked much with, but just seeing them it was clear they’d have a chip on their shoulder for anyone who so much as innocently questioned them.

So honestly, I can’t blame the AFA for preemptively burning the proverbial kudzu before it takes root. Given the hate that I’m sure the AFA has already taken from the trans community over their “cis-normative” nature…yeah. Why invite the “enemy” to enter the gates, even if this particular person has not done anything yet. Futa is the cancer that kills our boards and should stay on /d/, as they say. It’s an attitude I can respect, and perhaps even understand most days.

Still, I honor Jo regardless of any of these issues. He has proven himself noble enough in my eyes, and he stood by his family as is noble among our peoples. He is welcome in the realms and lands of Hela for now. For one who aspires to the respect of the Aesir and Vanir, I know not how much that means to him. But it is there. Flavel and Turnage are not fully dishonored yet, but they might want to put in a bit more work to regain the honor they have cost themselves with their deeds. Flavel, at least, is too new to have enough honor to cover this deed yet. Those in the AFA must decide how they shall view the honor of their leaders for this, though.

6 thoughts on “Tactics, Reality, and the AFA”