So “we’ve” done it. We’ve crossed the Rubicon. We’ve got “white nationalists” and “white supremacists” and “Nazis” causing “terrorist attacks” in America. Calls for the President to denounce these “white supremacists terrorists” and calls for listing everyone in the “Alt-Right” a terrorist have been sounded loudly, and repeatedly.

All because of a helicopter crash that had absolutely nothing to do with the Alt-Right, and a dude allegedly killing a woman who was part of a anti-fa mob attacking several cars. Meanwhile, over in media land, a Muslim man can mass murder 50 gay people screaming “Allah Ackbar” and not only will it absolutely, positively, unequivocally, not be terrorism…it will be connected with Islam and its homophobic teaching not a single bit. You Islamophobic bigot.

Now, the stuff I’ve read/seen does indicate that said vehicular homicide was due to anti-fa attacking his car, him getting spooked, slamming forwards, hitting a car, and then backing out as fast as he could. Because when an angry mob known for attempted murder attacks you, the fuck else you supposed to do?

Let them beat you to death?

Now, other reports are saying this was a deliberate attack by this young man. I don’t know if that’s true, and I’m not going to speculate. However, if it was deliberate it does open up some interesting speculation.

See, Anti-fa has been labeled a terrorist organization. And with good reason, they’ve attempted murder (bikelock dude is but one example). They’ve assaulted people in the streets over political differences. They have set entire areas on fire, destroyed property, looted, and committed various other crimes as well, all the name of causing politically motivated violence. Anti-fa is a terrorist organization. So if you see anti-fa, a known terrorist organization, attacking cars with the intent of doing harm to the occupants in a fit of political terrorism…is it terrorism to attempt to stop them, even with lethal force?

If you instantly say yes, congratulations…you just labeled victims of the 9/11 attack terrorists. Remember that plane that went down because passengers attacked and killed the terrorists who had hijacked their plane? You just called them terrorists for trying to prevent a terrorist attack.

Now, I’m not condoning revving up your car and smashing into mobs of antifa. As much I as believe political violence in our streets is inevitable at this point (I mean, it’s already been happening for months), there is absolutely no reason to kick start it faster than it must. But let us be honest here, if you saw a mob attacking people in their car…would you simply drive off, or would you at a minimum consider trying to ram some of the attackers and drive them away?

You can call it an act of terrorism if you want, but it was terrorism against known terrorists.

If you’re curious, those are apparently the brake lights on that car that drove into the anti-fa crowd. So apparently, the man was attempting to stop when he slammed into people and cars. And no, you can’t see the car he hit because there are that many people swarming the street attacking cars.

Combine known terrorists rioting in the streets attacking any suspected “white nationalist” while the Cops are operating under a “stand down/do not engage” order thanks to the powers in charge…and you’re presented with an absolutely lawless city with terrorist going around assaulting people who (whatever their political views) had every intention of engaging in a lawful, peaceful, protest.

Or in the case of Charlottesville, attacking innocent people in their cars because the “Alt-Right” people were already (largely) out of town!

That’s right, by the time Kitt was slamming into Anti-Fa, the Alt-right had been banned from the city and ejected from the entire area by law enforcement. I don’t know why the “terrorist driver” was still in town, but by all accounts everyone else was gone. Which meant Anti-fa was not attacking the alt-right in their cars, they were attacking innocent civilians!

And just in case you were going to say “Anti-Fa and BLM aren’t terrorists!” Well, remember, they had a home made flamethrowers they were using against the “alt-right” crowd.

Last time I checked, the use of flamethrowers (even one that pathetic) constitutes a war crime. And let us be honest, while that paltry 2-3 feet of fire is nothing super impressive, if you had someone down on the ground and hit them with that you’re still talking 2nd, 3rd, or 4th degree burns and a high likelihood of death depending on what you burn and for how long.

That right there in that picture is not just a war crime, that is assault with a deadly weapon. Yet it was not mentioned by the press, and no word that the man has been arrested, much less charged. Oh, but the guy driving a car which has pretty good odds of merely being an escape attempt was instantly arrested and booked on murder charges.

In an aside, I’ve seen reports that that was not the only flamethrower. That’s right there were multiple flamethrowers being used against the Alt-Right at the protest. Also, someone by the name of “Baked Alaska” may have been permanently blinded by being hit in the eyes/face with Draino by Anti-fa/BLM protestors.  So multiple flame throwers and chemical attacks have been used by Anti-fa/BLM.

Meanwhile also over in Media Land, you can drive a truck through a crowd in Sweden, dismembering people including a little girl named Ebba Akerlund whose body was torn into three pieces, screaming ALLAH ACKBAR!!!! and it will it absolutely, positively, unequivocally, not be terrorism…it will be connected with Islam and its racist teachings not a single bit. You Islamophobic bigot.

Have nothing to do with two cops dying in a helicopter crash and accidentally kill someone while driving through an angry, bloodthirsty mob of Communist and Black Supremacist terrorists?

Hell, supposedly Lorde actually did say that the “terrorist attack” was the fault of all white people. Many others including US Senators are declaring the entire “Alt-Right” nothing more than racist terrorists. Despite the fact that literally everyone was already packed up and trying to go home, except they couldn’t because of the God Damn Anti-Fa Terrorist Attacking Everyone!!!! 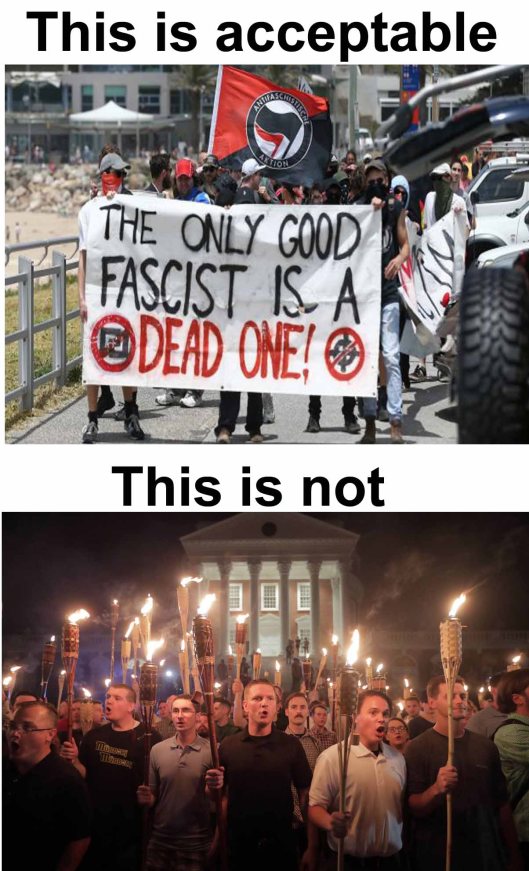 And why? Why I ask you? Because of their RACE? Because they’re the most unacceptable thing in the world: White? Oh sure, we can literal cop killing black nationalists marching around the street and you’re a fucking racist if you complain as they burn down your fucking town! We can have fucking Communists, with their body count of over 120 MILLION marching around the street trying to murder people with bike locks, chemicals, acids, and fucking flamethrowers! But you’re a fucking NAZI if you complain about that. You can have governments literally destroying historical artifacts because they think that’s the history of sub-human degenerates, not to mention the forces of law and order which are meant to protect people stepping aside so actual terrorists can assault law abiding citizens! But you’re a fucking white supremacist if you complain. Muslim Terrorists can kill hundred of people! And if you say anything, you’re an Islamophobic Bigot.