I have been accused of many things. Some of them are accurate, some of them not so, but one of the things I don’t think I’ve ever been accused of is thinking inside the usual boxes people think in. Don’t get me wrong, I fully cop to probably being low grade autistic and I have sperged out over many things, but I tend not to limit my thoughts to one particular path and only that.

However, limiting one’s world view is something I see far too often in general, and in Heathenism particularly. The annihilation of “brosatru” in favor of “innergarth/uttergarth” or however it goes with fancy old Norse ways of saying “in group/out group” so people can be absolute assholes to anyone and then rationalize it as “it’s part of muh faith, bra” is a good example of this. And yes I know I probably misspelled those things but I don’t give a fuck. I despise them, I despise how they are used, and I’m not going to bother learning the correct way to say them because they are not worthy of the respect it would take to do so.

So the other day, I came across a post on Huginn’s Heathen Hof which is a perfect example of this. I’m not going to do a blow by blow of the article. I’m not even really going to address any particular points of it, because the points are not the issue. The idea of the article is.

The basic idea of the article is the author putting forth the theory that the Vanir and the Jotuns were both Gods from previous cultures or stages of culture, that got supplanted by the Aesir due to migratory patterns and social shifts, with the Jotuns being the first as “animist” beings who are “the gods of untamed wilderness.” While the “spirits of untamed nature” is a completely accurate description, to my knowledge the Jotuns were never referred to in the Lore as Gods. To my knowledge, only the Vanir and the Aesir are named as Gods (more on that in a bit).

Now, despite the fact that I have very, very serious issues with HHH and their interpretations of Heathenism, I’m not going to say this theory is complete shit. For what it is, the post actually presents a decent theory. But it is a theory that completely ignores certain facts about Heathenism and our Mythology.

In short, it is a two dimensional theory, and that is why it fails.

When I say two dimensional, I’m actually being literal here. The theory is based on two dimensions: The first is the dimension of time, running in a straight line from past to present. The second is lateral geography, people moving across the face of the earth in various directions. This theory works on the basis that from X00bc-XYYad, C people moved through time and geography and supplanted gods from X00bc and Y00bc, turning them into relics as the new gods came to power.

It is a theory and world view limited by human arrogance, ignorance, and academia.

Not to get all “Ancient Aliens,” but Norse Heathenism is one of the very, very few religions out there that openly admits to there being other planets, and even what we would call solar systems, in existence. Earth, Midgard, is the middle world. And somewhere around it in space are eight other worlds, including Asgard, Vanaheim, Helheim, Jotunheim, etc.

Heathenism, and its mythology, exist in a three dimensional space.

Before I go further, I want to illustrate why this is an important distinction. In Star Trek II: The Wrath of Khan, Kirk is fighting Khan. Khan is an augmented human, with a genius level intellect. He can out think Kirk by miles and has been kicking his ass all day. But in the end Kirk beats him not by being smarter, but by thinking in 3D. See, Khan was using brilliant naval strategies…that worked on a flat plain. But since they were in space, not only was there forwards and backwards, left and right, there was also up and down.

The most brilliant theory doesn’t work if it fails to take in the environment in which it actually exists, rather than what it pretends it exists in. 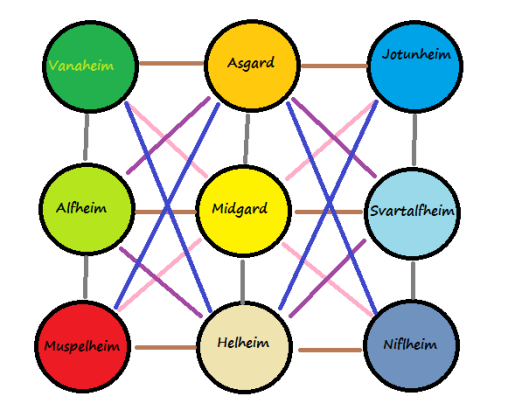 We are faced now with a three dimensional existence. There is Time, there is Geography, but there is also Space.

Now, we know from traditions both ancient and modern that Alfs live on Midgard, or at least have houses here. It’s a big thing in Iceland. But we also know from the Lore that Alfs have their own homeworld. We know, also, that this homeworld Alfheim, was given to Freyr as a teething gift. We know from the lore that the Vanir are a very agricultural, nature focused society, and we know from some of the lore that Alfs are very much in touch with and a part of nature. We know that the Vanir are Gods, but there is virtually no records of Vanir worship on Midgard as its own pantheon. In fact, most of the Vanir we know about are part of the Asgardian pantheon. The worship of the Aesir held primacy on Midgard since Odin, Vili, and Ve created the first of our ancestors.

So we know of the Vanir, we know they are Gods, but we also know that they are not Human Gods. Looking at things in three dimensions, we can see that the Vanir logically would be Alf Gods. Their ideology as a pantheon is replicated in Alfr culture, or at least it was during the times of greatest contact. Even the modern traditions of Alfs indicate this is still much the case. The reason there is less lore of the Vanir then is not because it was replaced and its practitioners replaced, but because it took place on another world entirely. A world we are connected to via Yggdrasil.

The same goes for the Jotuns, though slightly different. Looking three dimensional, Jotunheim is on the same level as Asgard and Vanaheim, which would place Svartalfheim in the logical position of holding the mortal races that worshiped the immortal races above them in the tree. But given the rather irreligious nature of Dark Elves and Dwarves, the Jotuns were not Gods to them, and thus are not ranked as Gods. They are as powerful, but they are not worshiped. And that is a key difference between what is a God, and what isn’t.

One could even have some fun thinking about the lowest realms. For instance we know that Helheim is the afterlife for Humans and Asgardians. Might then too Muspelheim and Niflheim also then house the afterlives for the other mortal races and their immortals? If Vanaheim is life then would not Muspelheim the realm of fire be the counter to that? And would not Niflheim, realm of frozen eternity not be the counter to the chaos of Jotunheim, in much the same way the calmness of Helheim is the counter to the vibrancy of Asgard?

HHH’s post is about how human imperialism goes about displacing and erasing peoples and culturally appropriating the former occupants Gods as monsters and devils. In the context of a singular planet with a rather atheist view of the Gods, this theory works, even if it is politically questionable and subtly works to reinforce ideas of “white imperialism.” It does not work, however, in the context of living Gods and the multi-planet system of existence that we have as Heathens. The Aesir and their worshipers did not “displace and assimilate” the Vanir and Jotuns and their worshipers. Those beings have always had their own realms, their own worshipers (or not), irregardless of the Aesir or humans. The logical explanation for our knowledge of them is not replacement, but contact (however limited) with these other realms. Realms we are attached to via Yggdrasil.

There are nine worlds of lore, and races fill all nine of those realms. To deny this is to deny fundamental truths of Heathenism. The best theories, should they ignore these truths, cannot bring any understanding or enlightenment to Heathens. It can only cheapen our faith, and reduce it.