So, back towards the end of September (Gods it’s weird as you start getting into Latin and learn that September is supposed to be the seventh month and it’s our ninth month) in which I posited an idea. A dangerous, deranged idea. The idea of trans-racialism.

In fact, assuming this news story is not fake (and judging by the amount of twitter traffic on Sargon of Akkad’s twitter channel it’s not), it’s been happening for almost two decades. Meet Rachel Dolezal.

And all the girlies say she’s pretty fly for a why girl.

That’s not the kind of thing one expect to find when one wakes up in the morning and scrolls through the inanity of one’s facebook feed. Then again, I have pretty much come to expect anything these days. We live in an age of …we live in strange times.

And I know I’m one to talk, because I’m pretty sure I’ve either outed myself as an otherkin of some sort at one point or another, or with all the talk of divinity, and I honestly don’t have a problem with the whole idea of trans-racialism. I mean, Hel, look at the original post. A better argument can be made in history for trans-racialism than for trans-sexualism.

But…did she have to lie about it, seems to be the general consensus of response. Right? Wrong. 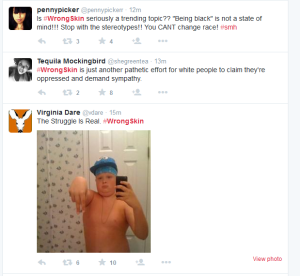 I always think it’s nice for racists to out themselves. Here though, we have racist transphobic people with penny and Tequila. I do love it when my negative behaviors can be grouped together like this. It’s awesome. But remember, the struggle is real, and transgender people need to stop being transphobic to transracial people. #Ally. Educate yourself. Also, check your privilege. You have no idea how hard it is to live in the wrong skin/body and not be able to be who you truly are.

So here we have it people. Lo, I am thy prophet, for I had seen this coming. All offerings and donations will be accepted. Mwuaahahahaha.

Now the two big questions, can I use this for supernatural purposes and how the Hel am I going to top that prediction!

4 thoughts on “Sometimes It Sucks being a Prophet”