In part one I gave some background going into the article I was sent from the site “Gods and Radicals” (that name is going to become hilarious shortly). The article in question is Confronting the New Right.

Now I’m actually going to post the “header” image they have for this article. 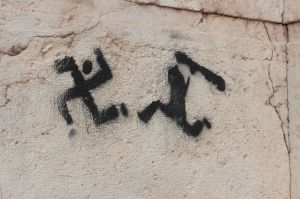 Now, I know what the image is supposed to mean. Chasing off nazis and fascists with what I’m guessing is a very large piece of wood. Ironically, it looks like a dude pulling a Zoidburg as he tries to run away from a murderous assailant. Once again proving that it can be hard to tell who the good guys are based on how they treat the bad guys.

But let’s get into the post itself, shall we?

What is the ‘New Right?’

The New Right is a Anglo-European intellectual, political, social, and cultural movement gaining influence within Paganism, Polytheism, Heathenism, and the Occult communities. Generally called either ‘proto-fascists’ or ‘crypto-fascists,’ their ideology mirrors many aspects of what we might call ‘traditional’ Fascists, though only a few on the New Right claim that identity.

First off we start with the term “Anglo-European.” Now, I don’t know about anyone else, but I find this term a bit…odd. It actually seems kind of racist. Typically when one hears the term “anglo” it’s in relation to Anglo-Saxon. So we’re already starting off with the erasure of Saxon identity. But then it’s “Anglo-European” so is there no “Franco-European” or “Deutsch-European? or other “Ethic-European” parts to this? Given that this “New/Alt Right” thing is springing up not just in America, but across Europe as well leads me to feel there is some “ethnic erasure” happening here on the hands of those who wrote this.

Now, to address, is the “New Right” a “proto-fascist” or “crypto-fascist” ideology? Well…in a lot of ways yes. In the same way that Progressive ideology could well be considered “proto-marxist” or “crypto-marxist,” in nature. See, one of the lovely things about studying history is that you actually learn who all these groups were when they started out and so you can recognize them when they show up again. And just as the fascists and marxists of pre-WWII existed driven by ethnic/gender/class lines in both the pro and anti group way that the New Right and Progressive Left are today…the sauce is for both goose and gander.

What does the New Right stand for?

The New Right is difficult to define precisely, which has been one of their greatest strengths. But here are some core ideas that are common in most New Right thinkers:

In the following I’m going to point out some “projecting” language as well as address the points.

Our Decadent Society: New Right theorists criticise modern civilization as being in a state of ‘decay.’ They tend to be heavily anti-Modern and sometimes anti-civilisationist, believing that society needs to return to a more noble, healthy, and ‘natural’ order.

The term “our decadent society” here is…interesting. Most of the time I’ve heard this term it is at the hands of Progressives, not Alt Right. While I don’t spend much time in Alt Right circles (it’s a pretty new movement) Some of those referenced as “alt right” I have spent time with their works and this term is…not generally found there. As a rule, if someone is screaming about our Decadent Society (I’m looking at you Rhyd) they’re a hard core “leftist” not a “rightist.”

That being said, there is some truth to this “anti-modern” bit. Mostly because the “modern” bit is generally Progressive cultural domination which goes on and on about how evil white people are and how they need to check their privilege.

Our Scattered Peoples: The New Right is pro-European and pro-white, though these ideas are rarely well-defined. They tend to see European peoples as part of a coherent racial, ethnic, and/or cultural group whose fates are tied together and are separate from other peoples. Though many are overtly racist, some (including Stephen McNallen of AFA) claim they are working for the liberation of all separate people groups. The key word here is separate.

Hello Folkism, my old friend. I’ve come to talk with you again.

Already hitting Heathens as racist fascists I see, oh author dear. That’s right people, Diversity is good, unless it’s white people being “diverse” from other peoples. Unless those other peoples want to be diverse from white people in safe spaces. Because whites are evil, you know. And anyone who tells you whites are not evil is a fascist. Because whites being separate from other races is evil, but other races being separate from whites is diversity.

Remember that anti-group vs pro-group thing I mentioned in part 1? Here’s a good example of it. Being “pro-group” is a sign of racism and fascism (and they’ll even name names!).

Our Sacred Traditions: The New Right advocates a return to ‘older relationships’ between humans and the Sacred. As part of their critique of modern civilisation, they believe that the sacred order of the world has been disrupted (through Democracy, or Marxism, or Monotheism) and humanity must embrace pre-modern traditions, be those Christian, Pagan, Polytheist, or Heathen.

If you’re a Pagan and this doesn’t set off warning bells in your head that something is wrong in the minds of the author and of the site Gods and Radicals which is throwing it’s full support behind this article, I’m not sure what I can do for you. I would say that 90+% of all Paganims has it’s roots in “returning to an older relationship” between the human and the sacred.

Heck, if we go back to the founding of Paganism in the modern era, it’s a 100% origination rate. Everything from Asatru to Wicca started as a desire to return to the older “pre-Christian” relationship we humans had with our divine beings. I mean, look at the language here: “…they believe that the sacred order of the world has been disrupted (through Democracy, or Marxism, or Monotheism) and humanity must embrace pre-modern traditions…”

I mean holy crap, that is Paganism as a whole. Or at least it used to be. With this definition, any Pagan can (and will) be labeled a Fascist. Think about that.

Our Lost and Despoiled Lands: “Blood and Soil” is a crucial aspect of New Right thought, though this takes many forms. Regarding ‘soil,’ there is a tendency towards Nationalist identity through relationship to land (European lands, primarily) and the desire to protect it from foreigners. Also, they tend to co-opt Indigenous and First Nations language regarding sovereignty without actual alliance with post-colonial and anti-colonial politics.

Think you and your people are a soverign people, worthy of life, liberty, and the pursuit of happiness? You’re a fascist. Think a nation has the right of self determination or preservation in the face of mass immigration and the factually proven crimes of those immigrants? You’re a fascist.

However the rich part in this statement is this: “Also, they tend to co-opt Indigenous and First Nations language regarding sovereignty without actual alliance with post-colonial and anti-colonial politics.”

Yeah, all the language about cultural appropriation, cultural destruction, the sovereignty of individual cultures, the Alt Right is using all the same language as the Progressives, but because they’re not attacking the “colonialism” they’re doing it wrong. Which means for the progressives, the argument is only good based on “what” group is using the argument. The instant the “Wrong” group starts using the same argument, they are bad and the argument is inherently invalid because of “what” group is using it. Hence the “co-opting” claim here, in an attempt to deliegitimize the argument’s validity.

Our Great Threat: The New Right creates group identity and coherence through focusing on external human threats. Immigrants and particularly Muslims are the primary ‘enemy at the gates’ in European New Right movements, as in North America. Another shared enemy is ‘Radical Leftists,’ be they Communists, Anarchists, Post-Modernists, Social Justice Warriors, or “Cultural Marxists.”

I’m going to copy this but switch some terms around because it perfectly shows what Sargon was talking about, how the “alt-right” and the “progressive left” aren’t really that different.”

The Progressive Left creates group identity and coherence through focusing on external human threats. Patriarchy and particularly White Men are the primary ‘enemy at the gates’ in the Progressive movements, as in Feminism. Another shared enemy is ‘Radical Right,’ be they Fascists, Folkish, Christians, Gamergate, or “Cultural Libertarians.”

Notice the sentence structure and grammar do not need to be altered. The statement remains as whole and solid pointed at each group. The actions of one, mirror the actions of the other.

Now, I’m going to largely skip over the “who are the leading figures” bit except to point out that 2 of the 10 examples they give our Heathen. McNallen and Tyr. McNallen gets called out for his “anti-Muslim” statments (which as everyone no doubt remembers were along the lines of “stop them from raping women” proving once again that “what you are” matters more than anything to the Progressive left). Tyr gets listed for being a “radical traditionalist” publication. Whatever that means.

We’ll cover the Paganism part of the article in Part 3.