Welp, it’s the vote heard round the world. Donald Trump is now President (elect) of the United States of America. I’ll be honest, it’s a shock. I never thought I’d see it, much less to the lead that Trump gained. But here we are. 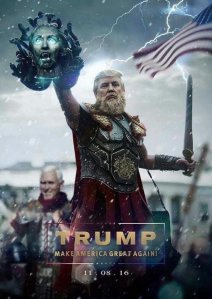 You have no idea how long I’ve wanted to use that image.

I stayed up until 2 am (or later) watching things to see what was happening, if this was in fact happening. It was unbelievable. That a man hated by his own party, and whom an entire political party, media, celebrities, major businesses, and even the Federal Government itself was set against…managed to sweep the election by sheer force of will and popular support.

Now, already the salt flows faster and harder than I’ve seen in a long, long time. Indeed, I’m just waiting for the major Pagan media to start posting that salt and then I’m probably going to have some fun. That being said, though I voted for Trump and have ultimately come to support his candidacy, this post today is not about Gloating in Victory.

Though certainly in the days to follow I will be saying Vae Victus to many.

The first thing I want to say to everyone is that…this is in fact a good thing. Even if you don’t like Trump, even if you hate everything he stands for…this is an election outcome that can give you hope. Why?

Because it shows a person not just outside the system, but absolutely hated by the system…can win if the people support him.

Trumps victory is a victory for Democracy, because it showed that the power is still in the hands of the people. The media, the elites, everyone in power can tell you every day that your vote doesn’t matter, that the system is rigged for their favor, that they own this government of ours…and it’s a lie. Because that supposed truth of our political system just got punched in the god damned dick by the people.

And that’s something to celebrate regardless of what side of the political fences you’re on.

I suppose the second thing I want to say is in regards to everyone going on about how America just elected a “bigoted, racist, sexist, unqualified person as our leader.” Now, there’s a lot of evidence both way regarding these claims (after all Trump won a lifetime achievement award for helping the black community, and opened a number of segregated spaces to blacks and Jews). As for bigoted, both sides are guilty of that. And when it comes to “unqualified”…honestly given the way the “qualified” people from both parties have completely fucked up everything for the last 30+ years…I’m willing to see how an “unqualified” person manages to do stuff.

But here’s the thing: Bigotry, racism, sexism, these things are…thoughts. Hela’s Grace, at this point they’re not even thoughts so much as “thought crimes.”

I care about how he acts. I care if he keeps his word. I care if he obeys the laws to the best of his ability (even if those laws allow them to do something others consider shitty). And Trump…pretty much has walked within these lines. That’s good enough for me. I’m not going to hate a man simply because he’s guilty of “wrongthink” and I’m certainly not going to hold it against him. If he takes this opportunity and completely fucks off with it, keeping none of his promises…then I’ll have a problem with him.

But I’m not going to hate a man simply because he believes differently from me.

Because if you care more about what a man thinks…how are you any different from those you hate. In the pagan community, we often rage at the Christians for insisting everyone share their morals, follow their religion, for allowing no deviate but to call it evil. And yet, now…how are you different? “He doesn’t have the same views as I do, his views are evil, I hate them, so I will hate him for believing them.”

The truth is…you’re not. You’re being bigoted about beliefs, you’re being hateful and spiteful over differences of personal belief, differences that we are all at liberty to possess. So please…let go your hatred. It won’t do you any good.

And it will get in the way of doing something that could make it better. Instead of fighting over “wrongthink” instead take the chance to make things better.

Let’s say Trump manages to do what he says and rework trade deals and stuff, and this brings back jobs. Instead of resenting Trump for being a bigot…take those jobs, take the money you make, and make your own personal community better, stronger, healthier. Not with the goal of Fighting Trump or Ending Trump…but with Growing Yourselves.

If Trump does build a wall and switches around Immigration the way he says…instead of calling him a Racist, work with the already present and legal Immigrants to help them build better, stronger lives so that they can help their families and friends come here legally. Embrace them and their culture, add elements to yours and allow them to add elements of yours to their own. If you fear being considered a racist…then show them that you are not.

At every turn, no matter what Trump does…you can act with love for your fellow countrymen…not hate towards a candidate you voted against. Do I think what Trump wants to do can make things better for our Nation? Yes, yes I do. But I think more important than one man, one leader…is the people.

Because Trump is where is he is because Of The People. It is the People who make this Nation. You. Me. All of us.

Be Excellent To Each Other. Regardless of what the other person believes.