So, I found this after the Mainer post and figured talking about would be kinda fun. Because why not have fun when you’re bored. I’m going to appologize in advance for crappy MS paint pictures that follow.

Today’s post is based off a post by someone called “Biblebelt Witchy Mama” entitled, “I’m a mother of both and you’re wrong.” Which leads me to instinctively believe someone is about to get thrown under the bus.

This has been showing up on my news feed recently. I saw it and my blood boiled. 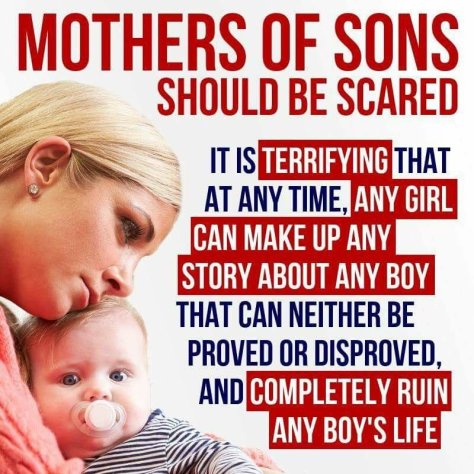 Normally I would say “good” because frankly, as a mother one’s blood should boil at the thought of your innocent son being accused of rape and having his life ruined, his reputation destroyed, his liberty stolen, and the absolute shit show that follows a false allegation. But remember, we suspect someone is going to get thrown under the bus here.

She starts her post talking about how as a college student she lived in constant fear of being sexually assaulted. She also tells the story of how one time she was filling up her car at a gas station and the attendant she was talking to (while being exceptionally cheerful and wearing a cute top) reached in the open window and “groped her,” then seemed started when she protested. And how this made here never roll down her window again further than needed to push her credit card through the window to pay.

At which point I’m completely lost as to when this happened because frankly I thought every gas station was self service through out the country since the seventies, but I suppose that’s not important. Maybe it’s a Jersey thing. She claims to have young children so who knows. Not really important.

As the mother of a daughter, I fear for what could potentially happen years from now in college. I fear for potential issues in high school as well. As I’m sure my mother feared about me before. I fear that what I went through will happen to her. Or worse.

Being only partially sarcastic, I’d say she doesn’t have to worry about that. Because at present rates, there will probably be a male population at universities of about 25% at best since most young men are having increasing trouble even finishing high school, much less getting into college. Even ten years ago when I was in university, the balance had already tipped so there were less men than women and it’s only getting worse from what I understand. Or, alternatively, the entire university economic system will have collapsed under its own weight and no one will go to college because they can’t afford the $1,000,000,000 student loan debts.

Child, meet bus. You have just been thrown under it. It’s probably going to be the most loving embrace you ever get in your life.

Look, I’m going to assume she’s raising her son to be a progressive, male feminist by this. And if I know one thing about those guys, it’s that they’re almost universally creeps who have engaged in so much sexual assault and blackmail as to have become a meme. Literally no one is surprised anymore when a male feminist is accused of being a philandering rapist. But they’re all on the “right side oh history” and often get a free pass from other feminists, so maybe that’s why this lady isn’t worried about her son getting accused of rape. Who knows.

But thinking “i’m raising him better than that” doesn’t change the fact that some woman could, easily, accuse him of rape. There’s a ton of “good, christian men who were raised better than that,” who’ve been accused. Upbringing is literally no protection against lies.

As a mother to one of each, I mindfully teach both of my kids consent. I do this with the purpose of Witchlette knowing the power within the word know(sic) and her use of it and Witchling to understand when he hears no, he is to back away.

Right, so we’re teaching one child she has absolute power over another person and we’re teaching the other that he is absolutely under the power of another person. I have no idea if this lady is also teaching the other way around, where he has the right and power to say no and her daughter has to respect it, but you’ll forgive me if I have my doubts about it. Also, I have no idea how old these kids are but with pet names like “witchlett” and “witchling” I’m not imagining a great many years. But they say sex education starts younger every year, so at this point I’m just waiting for some record of a baby’s first word being “no.”*

Oh boy. I could probably write an entire post on this alone, but there’s actually worse to come, so I won’t. I merely point people to go look up all the false allegations of rape that have been proven, especially at colleges, to disprove this. Like that foreign guy accused by Matress Girl, who proved the sex was consensual but still lost literally everything. Or the Duke Lacross players who nearly went to prison. Or a dozen other examples.

“Only evil men need to fear, and only mothers who raised evil men should fear!” Yeah, that’s a fucking laugh and a half.

But then we get to the good (bad?) shit.

Some of you may be familiar with this image. Some of you may not. Either way, we’re going to talk about it because I’ve seen it and it was broken down by a very nice anon. However, I have lost the screen cap of the break down so I’m going to try and recreate it. However I’m going from memory and have only ms paint, so I’m sorry for the terrible graphics to follow.

Now, there are two issues first. 1) “Rapists,” is based off of literally nothing. These were not reported, they were not recorded. they are literally just assumed to exist with absolutely no evidence to back them up (which you can supposedly see if you can make out the shit url at the bottom and go to the actual study). 2) “falsely accused” has two issues; a) it’s in the “rapist” category and not the reported category, and b) the person who made this graphic under-recorded the falsely accused. The original study stated something along the lines of 2-10 (I think it was even in percentages, which makes whoever drew this graph a lying fucking asshole, but we’ll deal with what we got. It was ten men according to the anon), so for argument sake we’ll go with the middle: 5.

Now, the nice anon broke it down even further, pointing out that with the “reported” category there literally was no evidence (even witness testimony) enough to put it anywhere near a trial. And as we are a nation that upholds “innocent until proven guilt” we could also ignore that category. But the primary purpose of the original graphic was to illustrate that “false rape accusations are nothing to worry about.”

But we can see some interesting things here. For one, if we looked at the “faced trial” vs the “jailed” we can see that of every three men put on trial for rape, at least one was jailed. We can also see that the “jailed” catagory is only twice the size of the “falsely accused” catagory.

Which means on a basic level (without getting into how many of the falsely accused actually end up in the “jailed” category), for every two proven rapists, there is a falsely accused non-rapist. We can extend this to the “trial” part where it wasn’t proven one way or the other. To put it bluntly, the numbers indicate that 1/3 men accused of rape is innocent, going by the ten proven guilty and the five proven innocent, and extrapolating from there.

Now of course in reality the numbers aren’t so clean. We know for a fact that some of those jailed are in fact innocent, and that some found not guilty probably were. But for the sake of argument we can say these numbers balance out according to the data collected by the very people who insist false accusations are not a problem.

So, do you still think concern is irrational?

The rest of her post isn’t terribly relevant or interesting. Mostly a story about asking men what they do to prevent sexual assault on themselves vs what women do, to prove that women have greater fear and face greater threat. At which point the autistic and agoraphobic parts of me wonder “if it’s so bad, why the fuck are you leaving the house, much less fighting for a world where you have to leave the house?”

Look, I know something about feeling paranoid and expecting an attack at any second from any direction. There’s a reason I tend to walk around outside of my house armed with several knives and stuck in a fit of paranoia. It’s also why I tend not to leave my house unless I absolutely have to.

But it is bullshit to admit to living a life of paranoia and then insist that someone else’s (well founded) paranoia is bullshit. The numbers might have some wiggle room, but they don’t lie. It is a serious issue to be addressed, not ignored because you don’t like it for some reason. And, if we’re honest, a woman in a paranoid state of mind who is on the look out for the slightest hint she is going to be attacks is likely to find it and make an accusation based on her perception of a threat, regardless of if a threat actually existed.

Those who go looking for trouble often find it, sometimes at their own hands creation. And that’s not even counting those who would maliciously lie for any number of reasons. Or a mixture of both, someone who was terrified of a threat but couldn’t identify her “attacker” and settles on someone who “triggers” some instinct that makes her think he was the one what did it.

One can only wonder how this mother would react if faced with a son accused by such a woman.

Based on this post, I suspect she would throw him out as a rapist and bemoan that he had abandoned her noble teachings which would have protected him for some form of “toxic masculinity.” Gods help the kid if that happens. I certainly wish him the best should he be innocent in such trying times.

*Given that there are apparently people insisting one should have a baby’s consent before changing its dirty diaper, this is not as far fetched as we might like it to be.

For those who can see it, the featured image is of Emit Till, a young man falsely accused of rape and what happens when you blindly believe accusations.